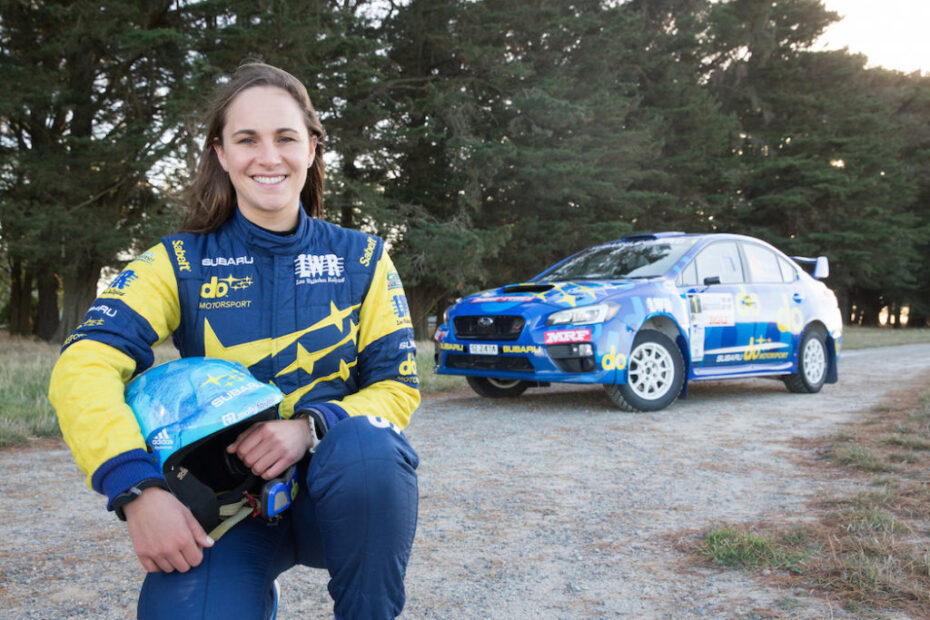 If I say ‘name a female race car driver’, maybe you’ll say Danica Patrick or Pippa Mann or Courtney Force. Or if you like things a bit dirtier, you may just say Molly Taylor. And if you do, I’ll say ‘hell yeah!’

One could say that driving is in her blood, as the daughter of a rally driver (dad) and co-driver (mom). But it was horseback riding that launched Molly’s need for speed. After she sold her horse to buy her first rally car, things really took off. She is not only the only woman to win the Australian Rally Championship, she’s also the youngest person to do so. I caught up with Molly when I was in Australia this winter to find out why she’s so badass:

I have to ask, as the mother of an equestrian, do you think your experience with horses helped you become a driver?

The thing for me that overlaps is that you always have to be one step ahead and adaptive. To me, there’s definitely a correlation.

For people that don’t watch rally, how do you describe it?

I say it’s a lot like Tour de France with timed races but on dirt, with cars.

When you go to parties and people ask what you do, what do you say?

Most of the time I just say “I work for Subaru” and then they say “what like sales and marketing” and I say “kinda.” I do that quite a lot, it saves 1,000 questions.

What do people always ask you?

Do you get scared is a common one. What’s it like being female in motorsport? Oh, and do you get nauseous? (Answer: only after the rare big night)

Does anyone ever pee in their pants?

Only the endurance guys. We only have 30 minutes.

Have you ever thrown up in a car?

What’s the biggest misconception about what you do?

To most people, it looks like a rockstar job.  They don’t always understand the preparation, the fitness, what’s involved leading up to it. But I like all of that, it keeps you grounded.

About 6 years ago, we had no money, no sponsors. We were riding the pace notes in a rental car in Spain..

Wait, you’re in a rental car? Like from Avis?

…yes, well it wasn’t that company, but yes. Anyway, we hit a rock and damaged the sump. All of the oil lights and everything came on, but because we were on a dirt road, we panicked because we knew we’d get in trouble. So we drove to the closest town and they sent a tow truck from Barcelona. We had to pretend that we were just tourists. Finally we got a cab 100 miles from Barcelona back to the rental place. Then we were in the queue at the rental place and saw some other drivers that asked “Are you here for the rally?” We said “NOOOO.”

I think winning the (Australian) Championship is up there. Then Finland in 2014, when we got a podium in the JR WSC because that’s notoriously the most difficult rally. And we had lots of trouble leading up to it, engine caught on fire and stuff, so..

Do you feel a responsibility as a role model for young women and girls?

More and more now. I’ve been quite overwhelmed with the number of girls that show up to rally. There’s one girl in particular that shows up a lot and was diagnosed with autism. She kept asking for Barbies but didn’t want to with them. She went to her therapist who asked, ‘you have all of these dolls why don’t you play with them.’ She said, ‘Well, I actually really like cars, but girls don’t do that.” So her parents did a bit of research to find women in motorsport and came across one of my videos on YouTube. They now came out to a rally and now she’s come out of her shell and she’s really into it. She’s now started her own YouTube channel and has come out of her shell. At first, she wouldn’t even make eye contact. When I see stuff like that, I’m inspired.

For me, it’s people who aren’t aware that they’re sharing the road. In Australia, it’s really bad with people sitting on the outside lane.  We have so much emphasis on not speeding that people focus on doing just a couple Ks under the limit. People don’t realize that you can be just as dangerous if you’re doing 55 vs 61.

Is there is a particular vehicle that violates more than others?

That’s only because you don’t have enough Priuses.

previousHERE at CES 2019: Mapping Matters
nextDear BMW, Zanardi Is Worth Every Penny