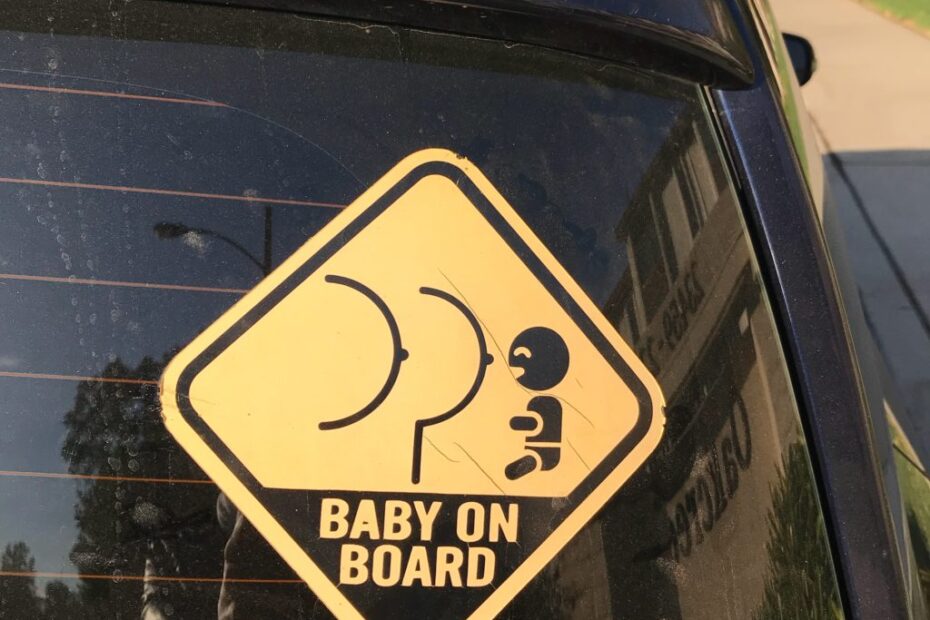 ‘But it’s a lease!’ they squeal. ‘What if I change my mind!’ they exclaim. ‘What if it pisses some psycho off!’ they whine. The excuse for NOT having bumper stickers abound. But for the few, the brave, & the badass few that are still willing to adorn their bumper with an edgy, awful, or provoking sticker, I salute you! And then there’s this: 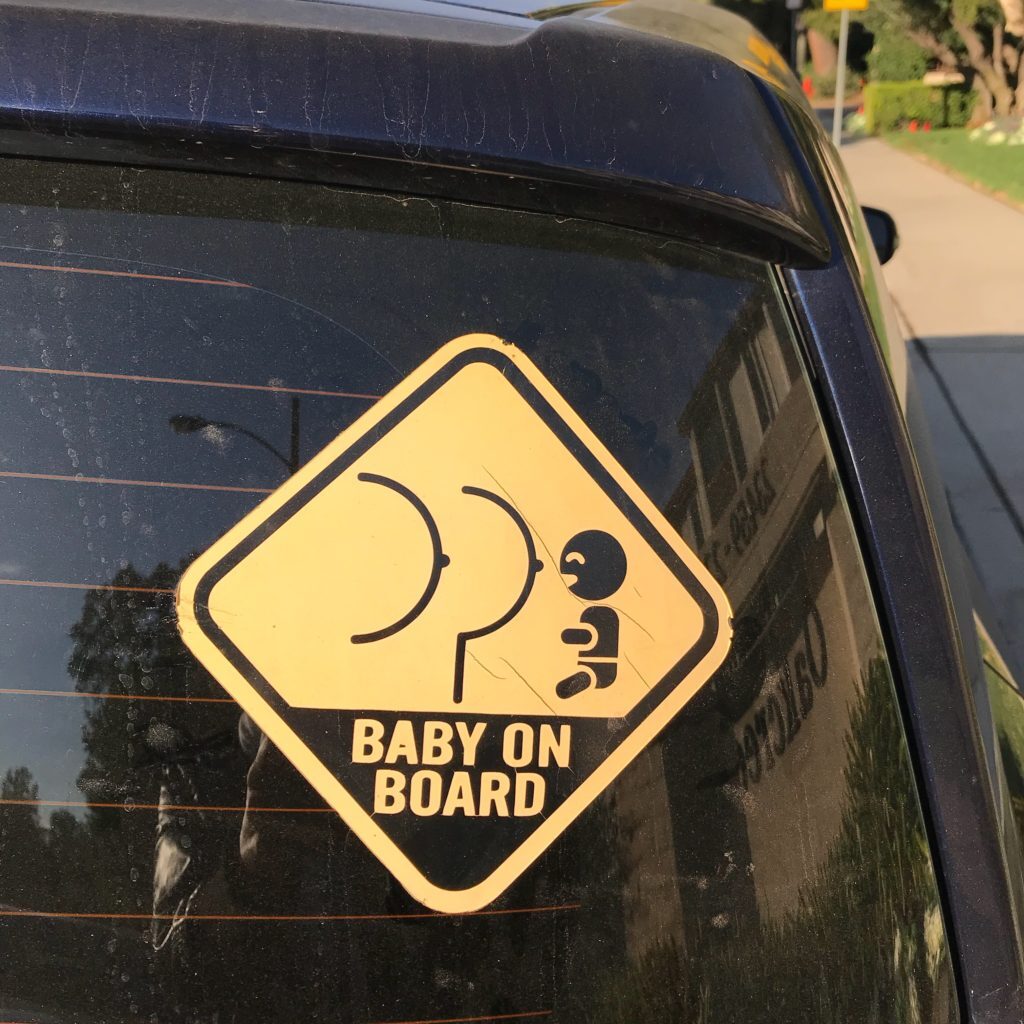 Um..WHAAAAAAAT the hell is that? As a woman who actually endured an excruciating stint with a baby on board my very own tatas, I’m appalled.  I mean, look at that thing, mouth agape, ready to pounce, it sends shivers through my bra straps.  Not to mention the fact that the actual baby is taking up a notably small portion of the sticker. Maybe they’re not protecting the baby at all. I get it, they probably paid good money for that rack.  It should really just read ‘Impants On Board.’  All I know is that it’s a serious d-bag maneuver.  Luckily, there’s this guy with the perfect antidote: 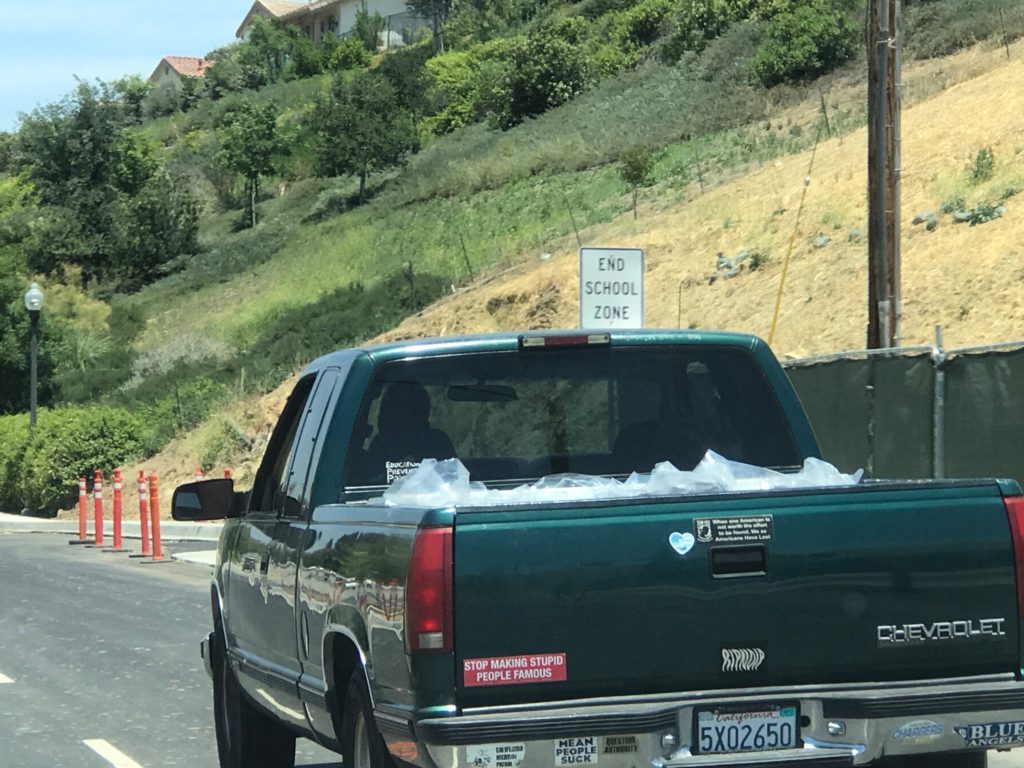 He is simply the greatest.  You look up ‘Dude’ in the dictionary and he is there drinking beer in a can. Love him! And I agree, we should TOTALLY stop making stupid people famous. Unless, of course, that stupid person is me & fame comes with a free DB11 and buckets of cash — in that case, bring it on! 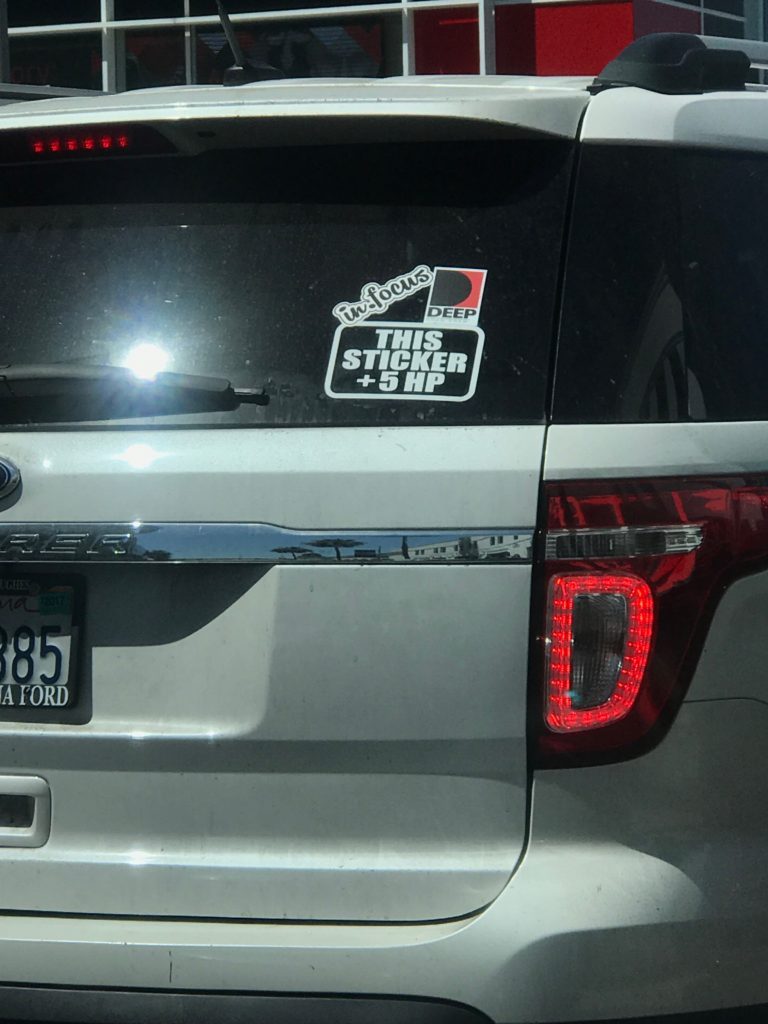 Another dude move. Especially because there are so many guys that put ‘racing’ stickers on vehicles that will barely make it down three exits of the 405.  Brilliant.  But this? 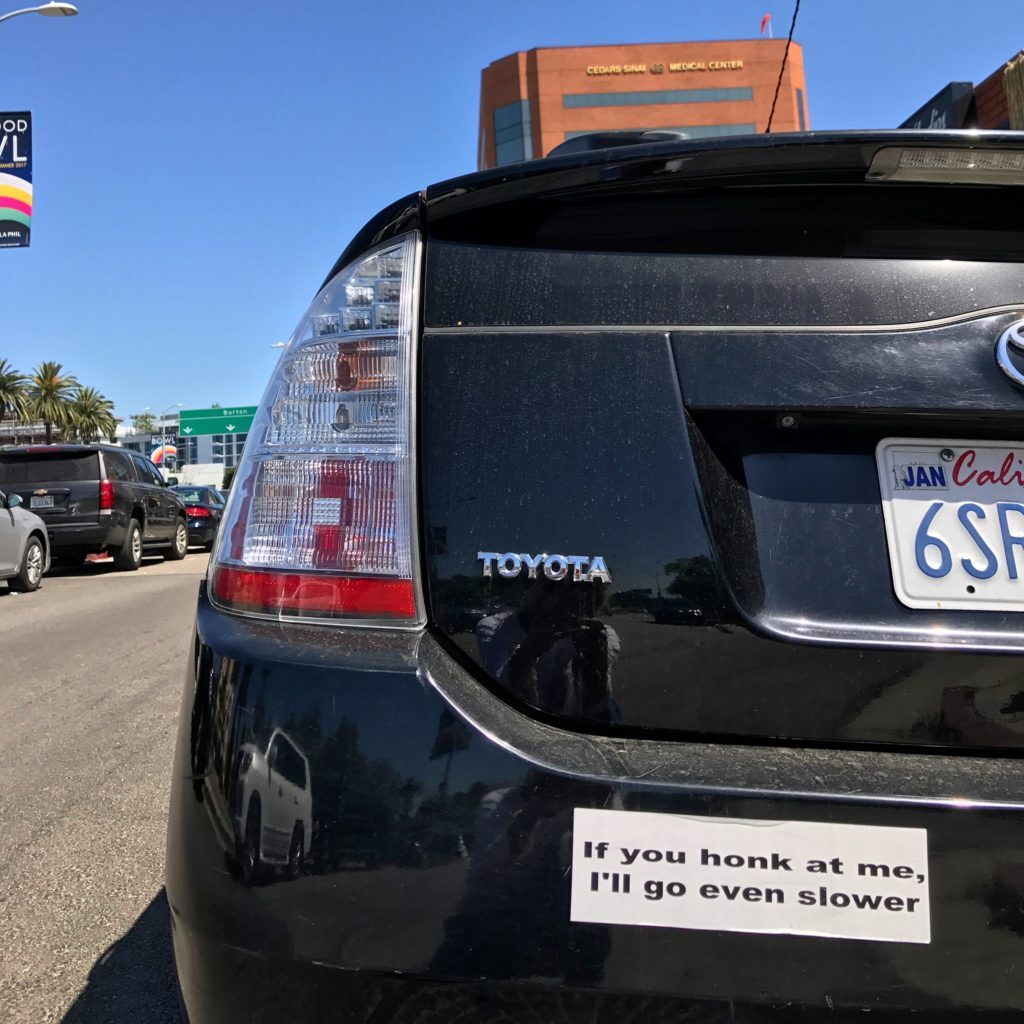 Holy road rage inciter, Batman! It’s a Prius, so there’s that.  Oh I was fully expecting it to be slow and was prepared to give it the space it needed to drive terribly. But now that I’ve read that sticker..  I’m gonna lay on the horn like my grandma when she’s 3 minutes late for church, let’s go! Luckily this showed up to calm me down: 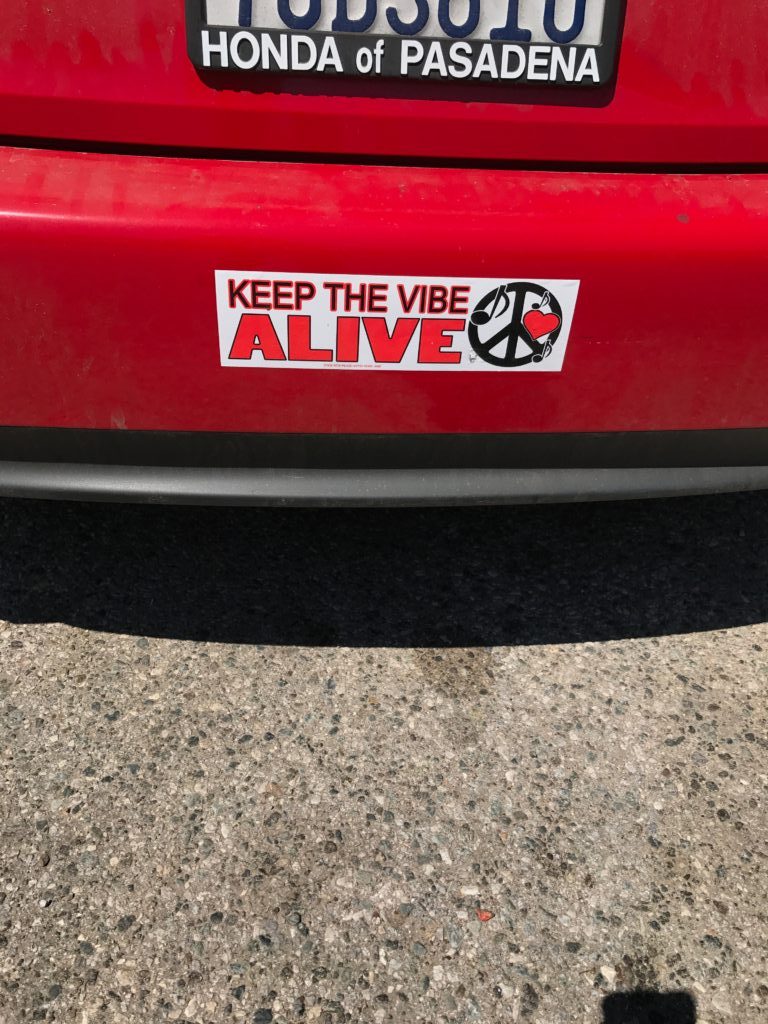 Yes, you’re right, hippie dude.  I should put on some Crosby, Stills & Nash and calm the hell down.  Thank you.  And thank you, hilarious dachshund enthusiast: 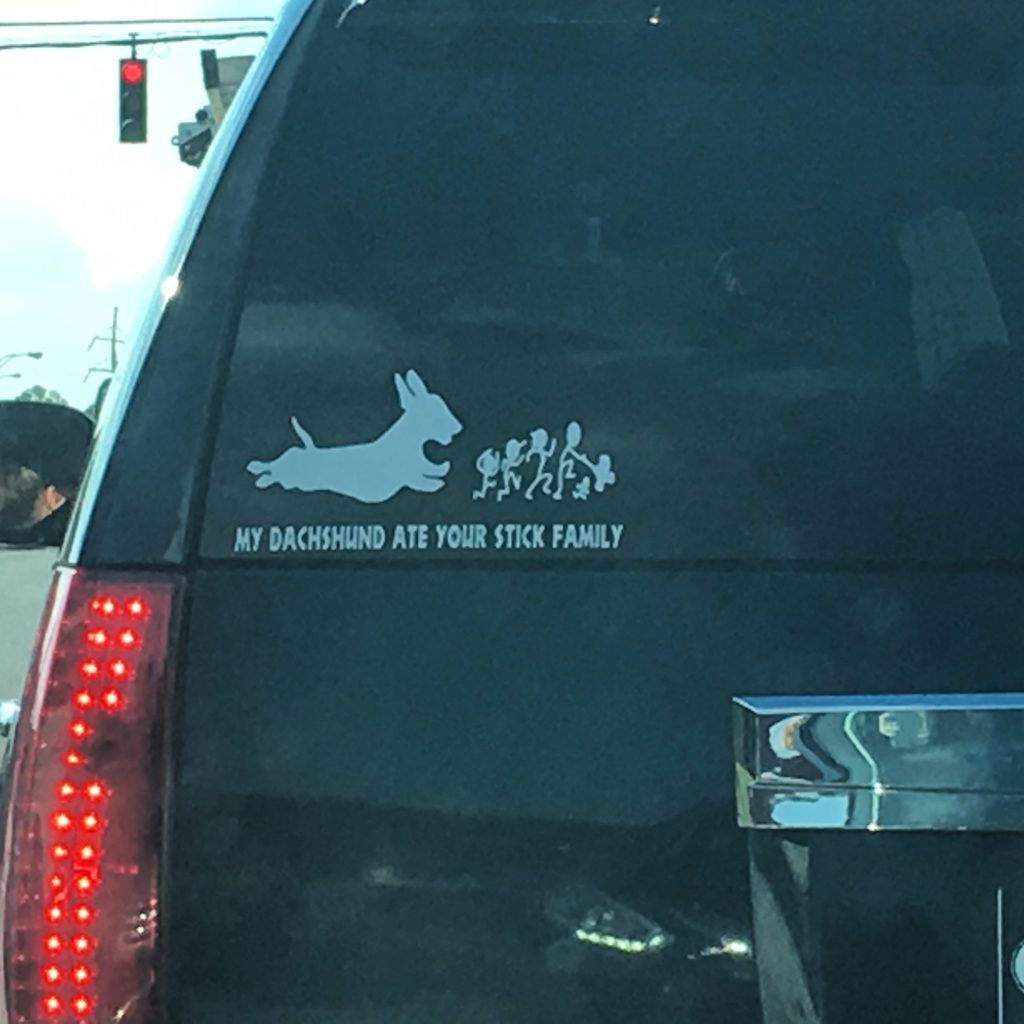 You and your little doggie are dudes.  Finally, my favorite sticker of 2017 is a mash-up of my two favorite places on the planet: 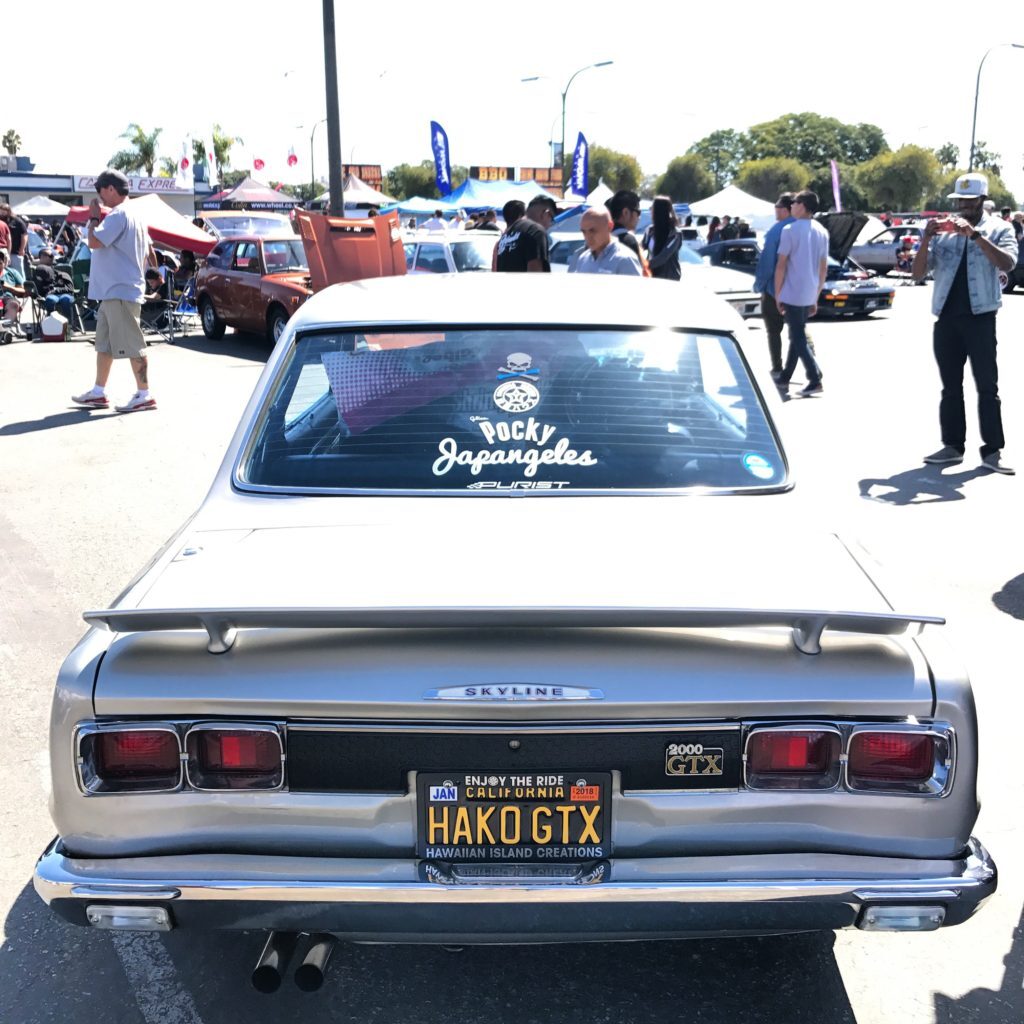 Isn’t it great?  And on the Skyline, it really makes life worth living.

So I’ve showed you mine, you show me yours.  Bumper stickers that it is!  I know you love them.  Share them on Facebook, Twitter and Insta..I’m all over that sh*t.

Oh and if you want a Motorhead Mama one, hit me up!