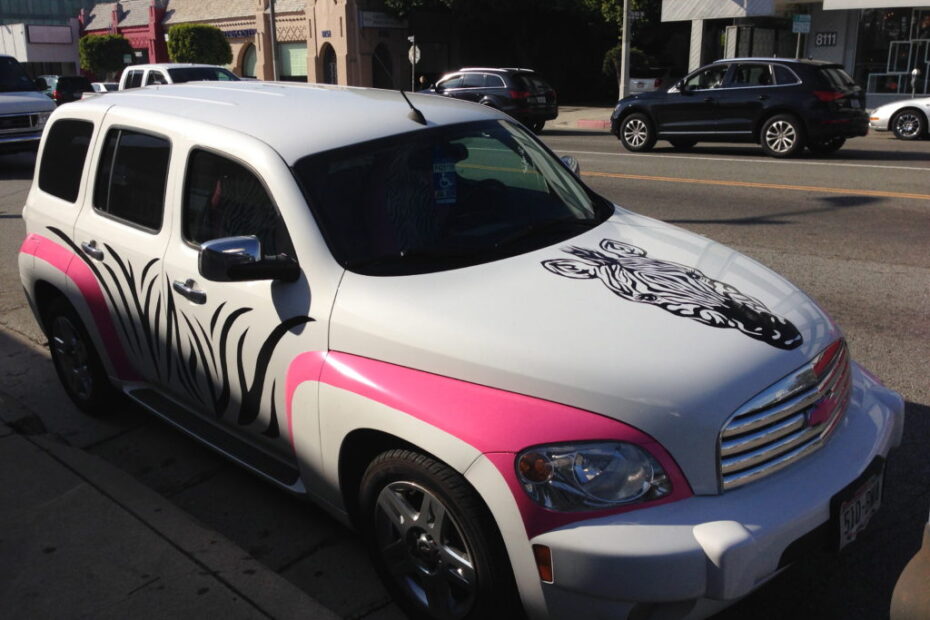 It all started with one, West Hollywood Zebra Douchebag.  Like most tragic tales do.  One afternoon, I spotted a crazy-looking zebra car parked in front of my office.  And it went a little somethin’ like this:

So, of course, I ran out and paced around the thing, looking for some type of clue.  It must have a “Save The Zebras” magnet on the side or perhaps the driver side door would read “Zebra Graphics. Your source for all things black & white. 1-800-GO-ZEBRA.”  But I circled & circled & you know what I found? 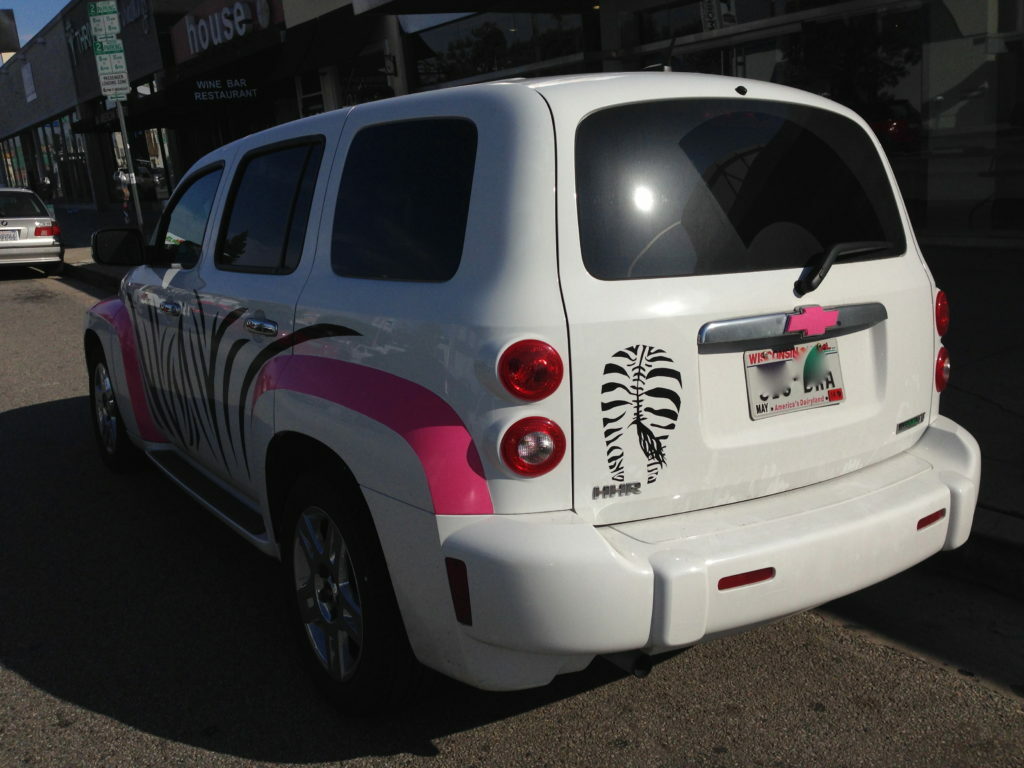 Nothin’ but a little zebra ass.  OMG.  This is worse than I thought.  This isn’t  another obnoxious promotional vehicle on the streets of my fair city– this is some fool who not only purchased a Chevy Heritage High Roof (a worry within itself) but then spent actual money covering it in zebra nonsense…for fun.  How awful. And we think we have a debt crisis? Conflict in the Middle East? Ebola? Whatever–this is real, people.  Serious douchebag syndrome.  I figured the only good news was that the crisis was isolated to one, tragic individual. Then, 35 miles away I spot this: 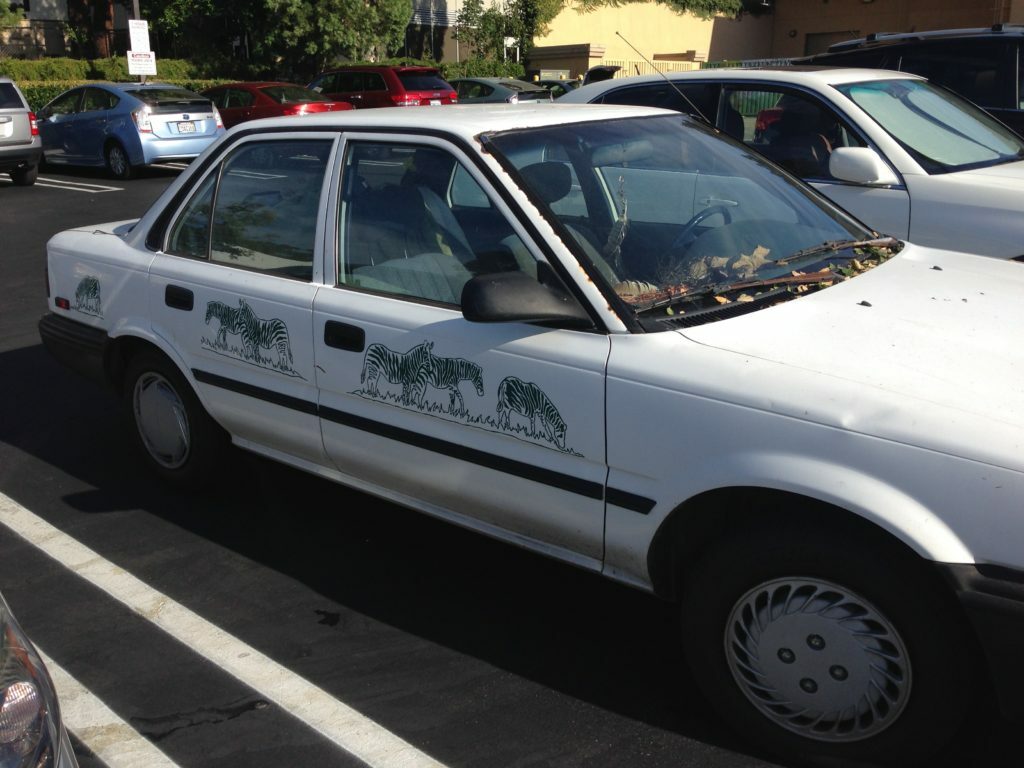 Oh no! This is serious.  There are more of them! What’s also disturbing is that this zebra-scape is slapped on what appears to be a ’95 Tercel (or something equally tragic), so instead of upgrading themselves with things like, I dunno, airbags or power windows, they chose to spend their hard earned cash on the zebra applique. Que? But I guess it’s pretty standard for someone who chooses dead leaves & feathers for dash adornment.  Poor, silly d-bag.

But then, redemption came.  It arrived in the form of two spectacular limos on the streets of Venice Beach: 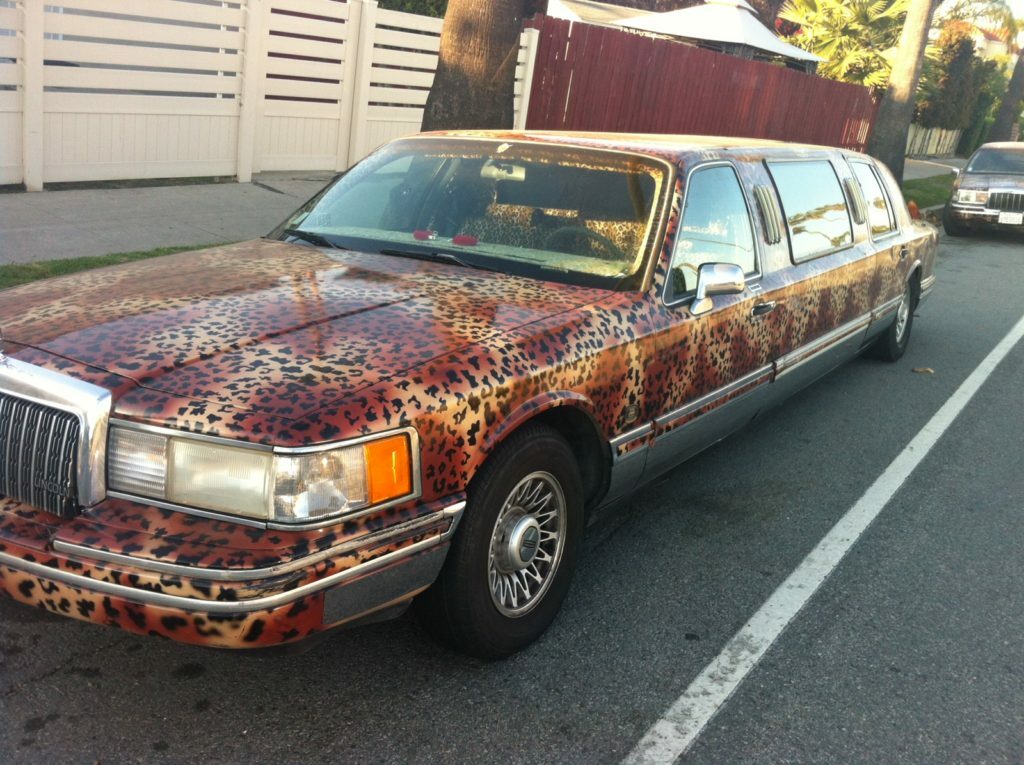 Now this is what an animal car should be!  It’s fun, it’s sassy, and it’s leopard from bow to stern!  I love it.  Check out how they’ve not only covered the entire car (bumper included) but also the upholstery and even the interior in leopard print.  It’s so great that you don’t even care that this is an older Lincoln with yellowing sidelights and lame wheels, it just doesn’t matter. (Although I am vaguely disturbed by what appear to be fuzzy handcuffs on the dash, but whatever, everyone’s got a blemish)  So thank you, leopard limo, for making the roadside safari dramatically less douchey.  You, my beloved beach side big cat, are a dude!

previousCar Slut Confessions: A Man(ual) On The Side
nextDear Volvo, You’re A Punk Ass Bitch…