Freak of the Week: The Mexican Croc Hunter 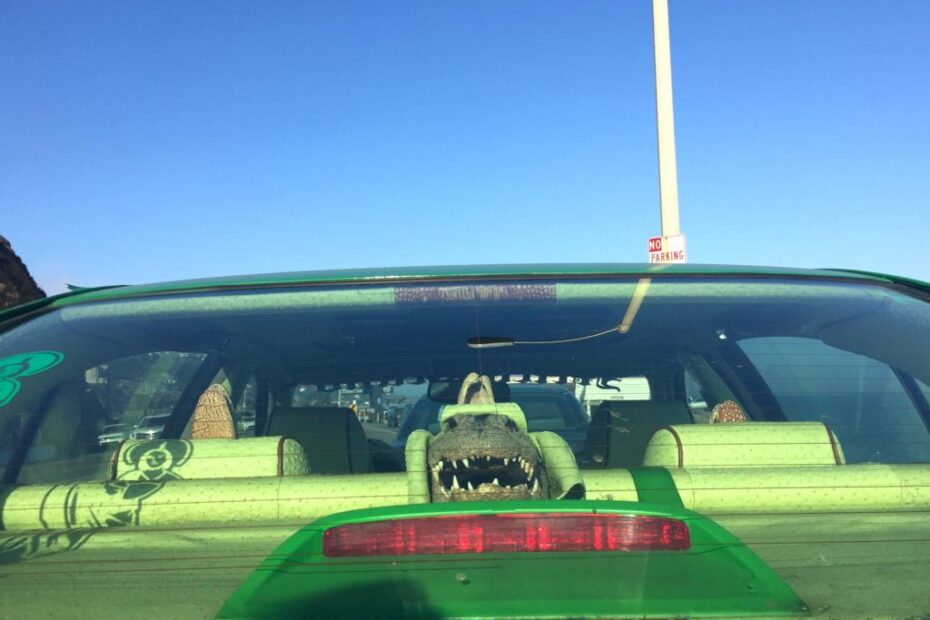 One of my favorite places to look for crazy cars is Mexico.  My Latino friends (especially the men) aren’t shy about being as freaky as possible in their rides.  But sadly, this summer I’ve been chained to my desk and unable to stray south of the border. The good news is I live in LA, where Mexico comes to you.

I was recently driving into town with a new friend, when I spotted something crazy on the side of the road: 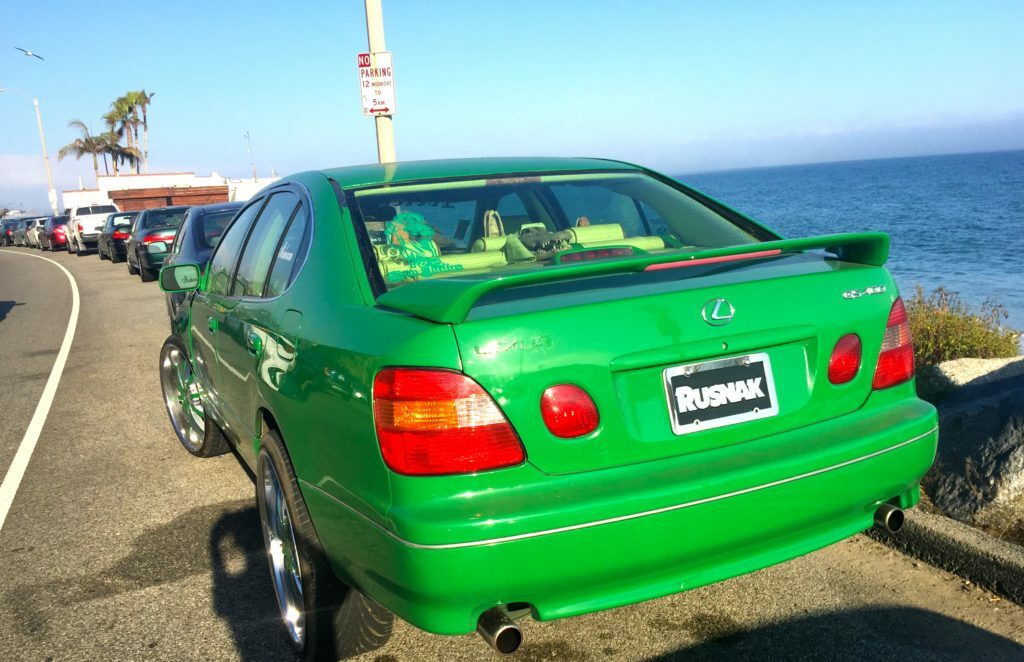 It was big, it was green and it had wheels big enough for a John Deere.  I let out an audible squeal, then pulled into a nearby restaurant valet line and left my friend idling dumbfounded in my car as I ran into traffic to get a closer look.

Now, if you’ve ever been to Malibu, you’d know that running through traffic on PCH in July is like dodging 747s on a JFK runaway– total, utter, life-risking chaos.  But for you, for me and for the love of all things freaky, I made it happen. And boy was it worth it.

Here’s a little hint why:

What’s that, you ask?  It’s a crocodile heading peeking out of a Lexus. What? You’ve never seen that before? Just wait, cuz it gets weirder! 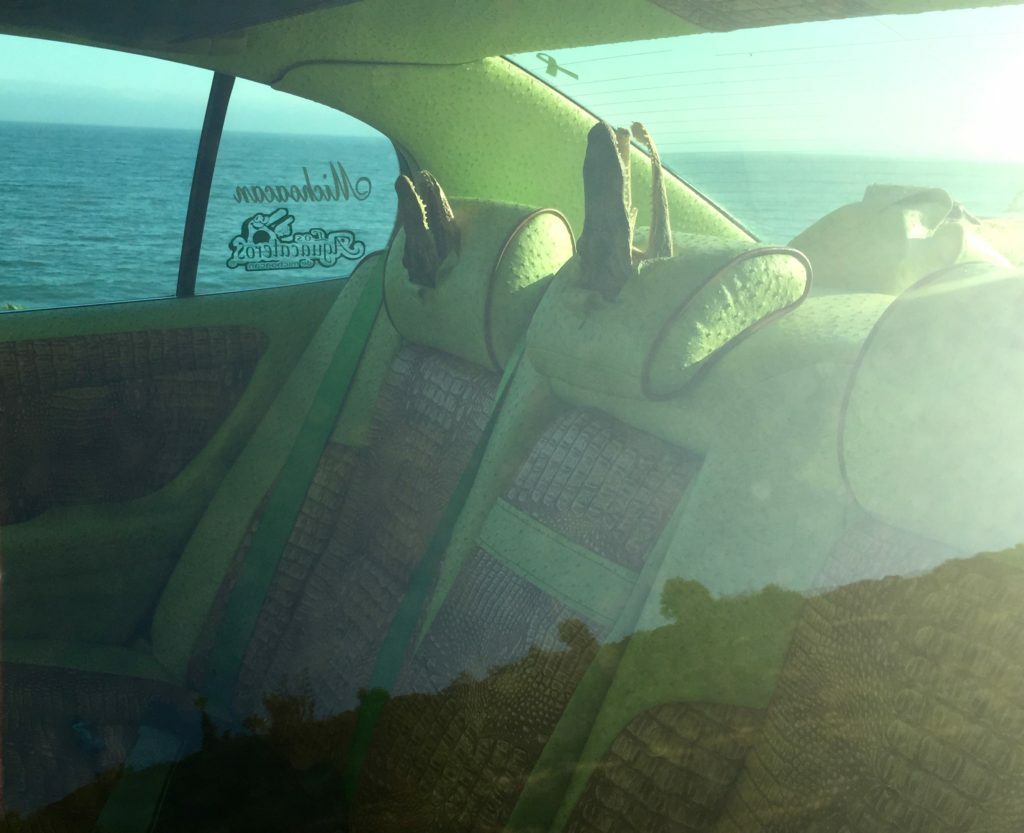 Crikey! There are crocs all over this Japanese luxury vehicle– don’t miss that upholstery, roof, and all. This guy not only bought a new car and put some croc heads on the back, but he completely upholstered it, pimping it top to bottom with green seat belts and some fat wheels! 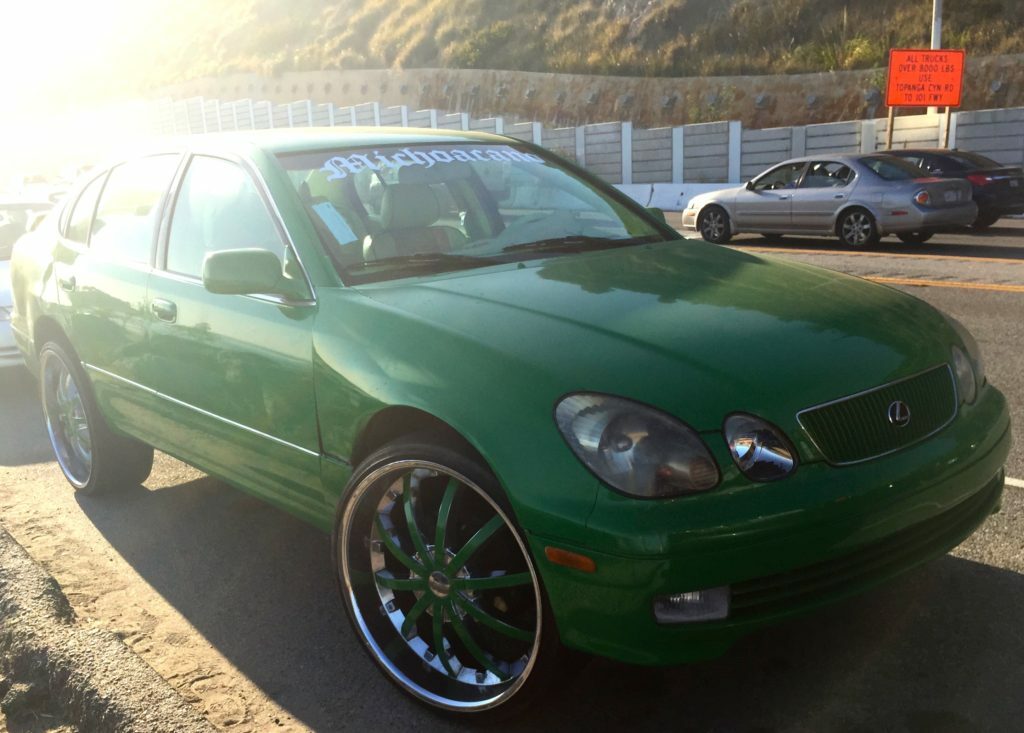 (please excuse the crap photos– did I mention I was dodging traffic?) But here’s where it gets really great.  Turns out, this isn’t just a random machismo statement. It’s a Michoacan statement.  Michoacan is a state in Mexico and is popularly known as “the birthplace of the drug war.”  I’m guessing by the enormous sticker on his windshield that this driver is from there.  And he’s proud of it.

So who cares, right?  Well, he’s probably sick of it all. Sick of the pity, sick of the sorrow, sick of it all. It’s gotta be like being from Gaza– when you mention where you’re from people can only really say  “I’ve seen that place on the news” and that’s gotta get old after a while.  By converting this car into a mobile Michoacan celebration of its wildlife, he’s convinced at least one crazy Californian to respect where he’s from.

After snapping these awful shots, I ran back to my friend screaming “you gotta see this!” As I scrolled through my Camera Roll, oozing with delight she said calmly, “What it is you do again?” Oh boy…

2 thoughts on “Freak of the Week: The Mexican Croc Hunter”