Only In LA: Heaven Is A Target Parking Lot 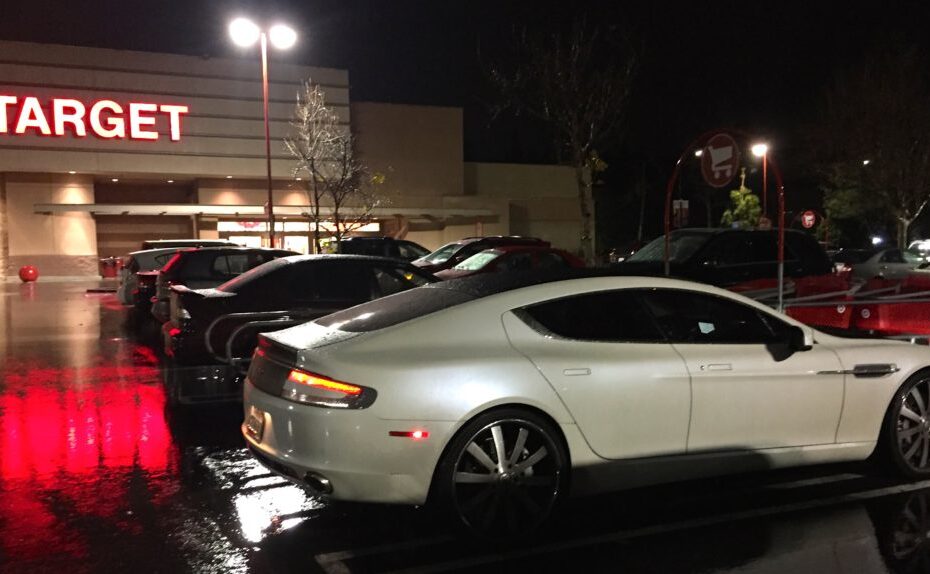 Despite my best efforts to dismiss it, let me tell you, people, this mom stuff is real. I’ve got two little monsters, and they need stuff. A lot of stuff. So roughly every 3 days, I schlep my posse down to the valley where I load up all on crap.  And then we do it again. And then again. This process can often be a Sisyphus-like tragedy, but I’ve found a way to make it fun. I go to Carget.

Yes, smarty pants, I know it’s called Target.  Well, maybe to you.  Here in LA, we have all kinds of Targets. There’s the one in West Hollywood (Targay), the one in Culver City (Targhetto), and one pretty much everywhere else (Tarjay).  But with Lamborghini, Porsche, and Ferrari dealerships all within a stone’s throw, my local discount mega-retailer is also a car show. Don’t believe me?

Well, how many Aston Martins do you see when you’re buying tampons? 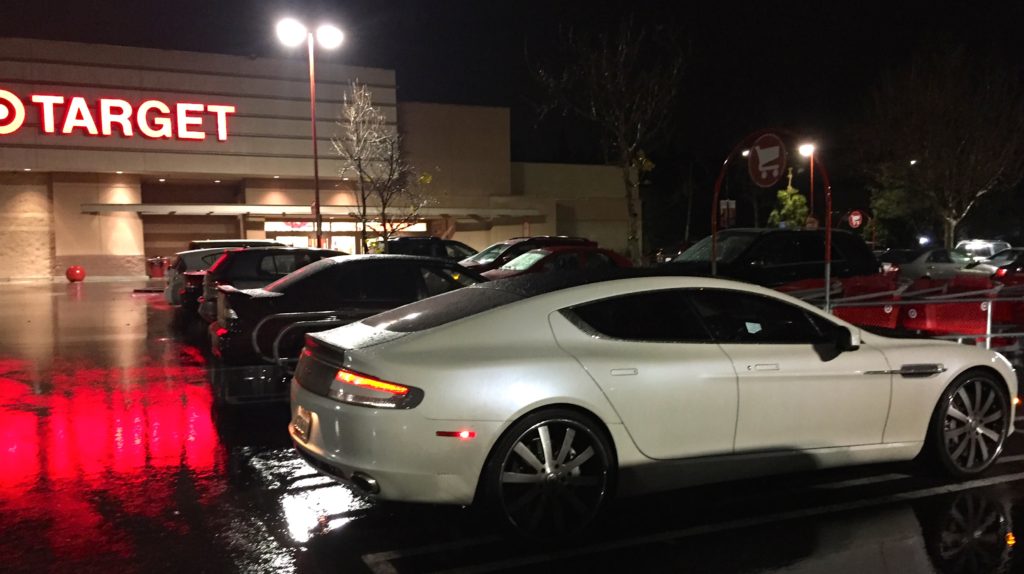 It’s one thing to see a Vanquish or a DB-9, but how about a Rapide S? Just imagine how quickly she’s gonna get her maxi pads back to her mansion with that v-12.

Or what about a Rolls?  Maybe you see grandpa in a Silver Shadow grabbing some extra chamois before his Sunday drive.  But here at Carget, I recently saw a Wraith: 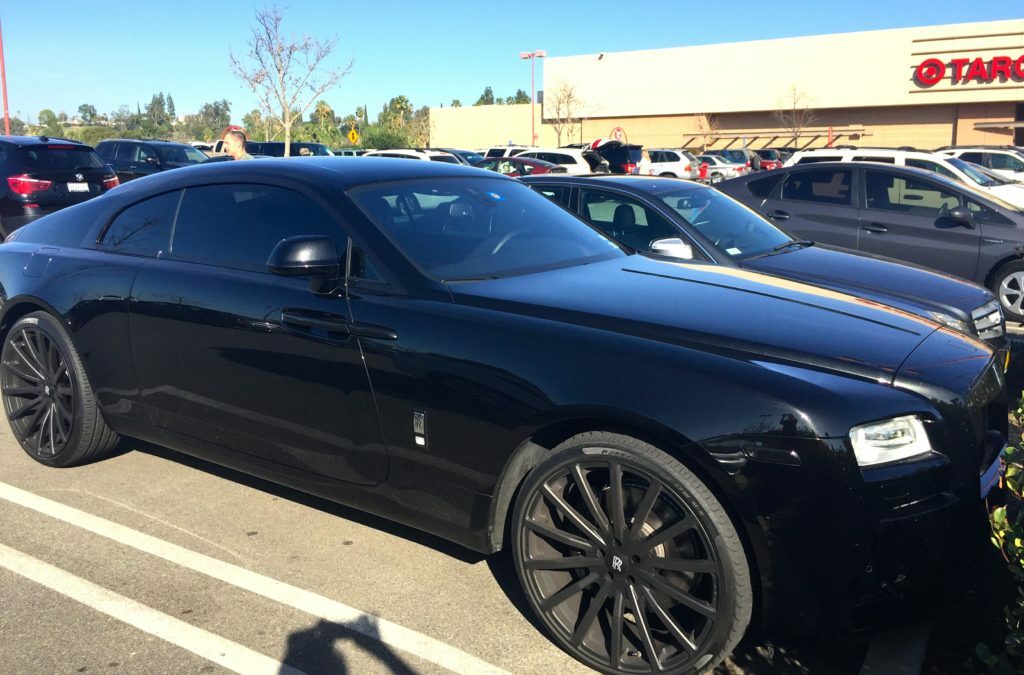 It’s got a V-12 too and over 600 bhp. But the best part about spotting this two-door coupe here and not on the valet line is that at nearly 123 inches, it’s longer than most SUVs.  We all know how impossible it can be to find a decent, potentially dent-free parking spot at Target. That makes the fact that this person squeezes her $300k Rolls between a C-class and a Prius so incredibly badass. If that was me, I would’ve parked in Uganda.

It’s not all glitz and glamour at Carget.  There’s also plenty of T&A:

Maybe you remember my post about the topless housekeepers (shameless self-promotion warning), which I’ve linked here. Of course, that van was parked outside of Carget.  Because we both know that the Topless Maids’ key demographic is moms buying juice boxes and Bounty. Who cares? It made me laugh hysterically and gave my girls plenty to debate during the ride home.

Sometimes I fall off the wagon and go to another Target. Like the time I went to one Westlake Village and saw this: 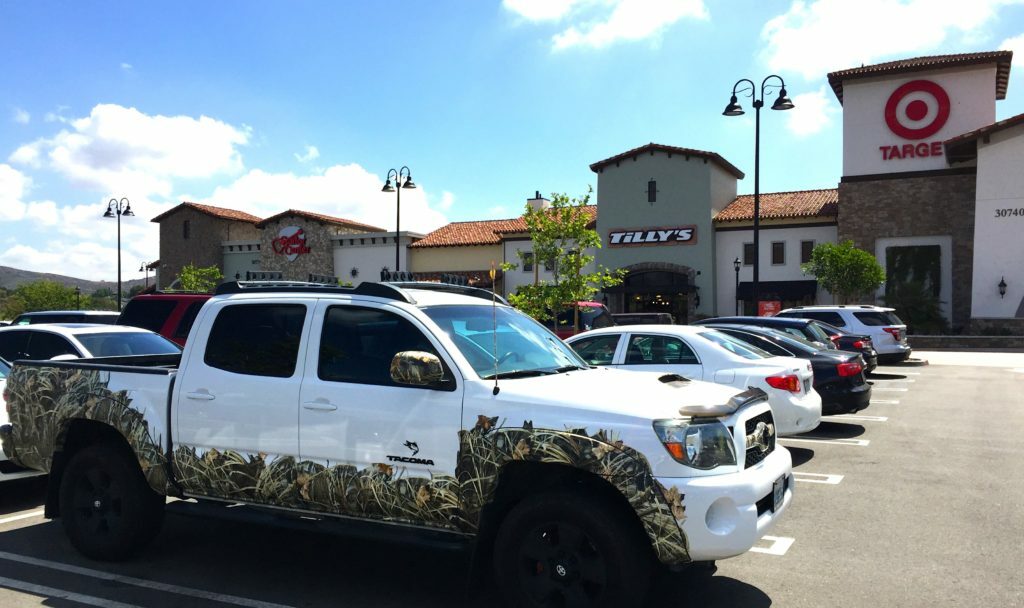 It was awful.  Like I had landed in the middle of the country where they hunt for meat and burn heretics like me at the stake.  Although I did enjoy his arrow antennae, that’s cool.

What happens in your Target parking lot?  I really wanna know. So the next time you’re off to refuel your pantry, Expect More, Bitch Less, and take some time to scan the automotive delights before you.  You may just find something even better than the dollar bin.

4 thoughts on “Only In LA: Heaven Is A Target Parking Lot”

previousFather’s Day Gift Guide: Because Brunch Is Bullsh*t
nextFreak Of The Week: The Bronco Patriot