Toyota Supra: Back and Almost Better 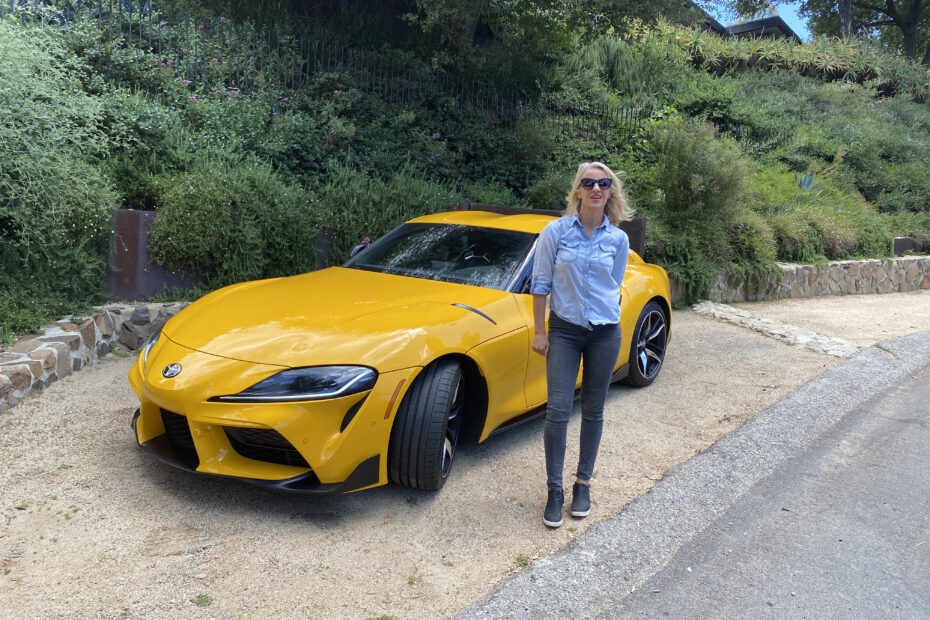 The other day, Freya and I were walking the dogs and we saw this incredible looking car. “What. Is. That?” she asked. “Ummm…” I said, perplexed. “I think it’s the Toyota Supra.” She said, “That yellow thing you had last week?” Yup.

I normally don’t post stock images, but my hands were full of leashes and dog stuff during our walk so I didn’t get a shot of that car. So here it is in Downshift Blue. That version of the Supra was so gorgeous, I want to be sure you see it. Remember it. Write that down. Because if you’re to buy a Supra, that the color to get. Ok, back to business.

If you’re wondering, the Toyota Supra…hmmm… that sounds so familiar. Yes, it’s the vehicle that your brother’s vaguely dorky friend drove in the 80s. You remember, the one that listened to a lot of Genesis and Roxy Music?

Yup, that’s the one. You may have thought he was kinda hot in a mysterious, aloof kind of way. But you sure as hell weren’t dating him. (Spoiler alert: that’s kinda how I feel about the Supra.)

But then in 2002, the Supra was gone. Just like that. But last year, the Supra came back with tremendous anticipation and much fanfare. The first production model sold for $2.1 at Barrett-Jackson auction in a badass fundraiser for the American Heart Association.

A collaboration between Toyota and BMW, the new Supra is based on the Z4. That means its inline 6 cylinder 3.0L turbo engine is a BMW engine. Noice! But even better, it means that the interior of this vehicle felt a lot less Toyota than it did BMW and that’s just the beginning of the things I dug. Check out my Pros & Cons right after you check out my video (and subscribe!):

*The engine is perfect

*The brakes are badass

*Manual mode is kinda fun (not fun enough, see below)

*Road feel is real (as it should be)

*Backfire sounds are infuriating! If you have to work that hard to sound cool, you aren’t.

*Visibility is straight up crap

*Cockpit is cramped (if you’re a big person, faggitaboutit)

Now, the convertible situation is reportedly a part of the deal with BMW. They were like, ‘Sure go ahead, take the coupe. Just don’t make a convertible. (cuz convertibles are the only ones that sell, mwaaaaah!)’

Overall, the Supra is a blast to drive. But, it just didn’t butter my biscuit. Part of that was I just can’t justify $58,000 on a Toyota sportscar. There are so many better ways to spend that money. In fact, I’d rather buy his and hers Hyundai Velosters, at least those would be manual transmissions and would own their ugliness. But it doesn’t mean that the Supra isn’t for you. Just make sure you buy it in Downshift Blue and add your Genesis playlist.