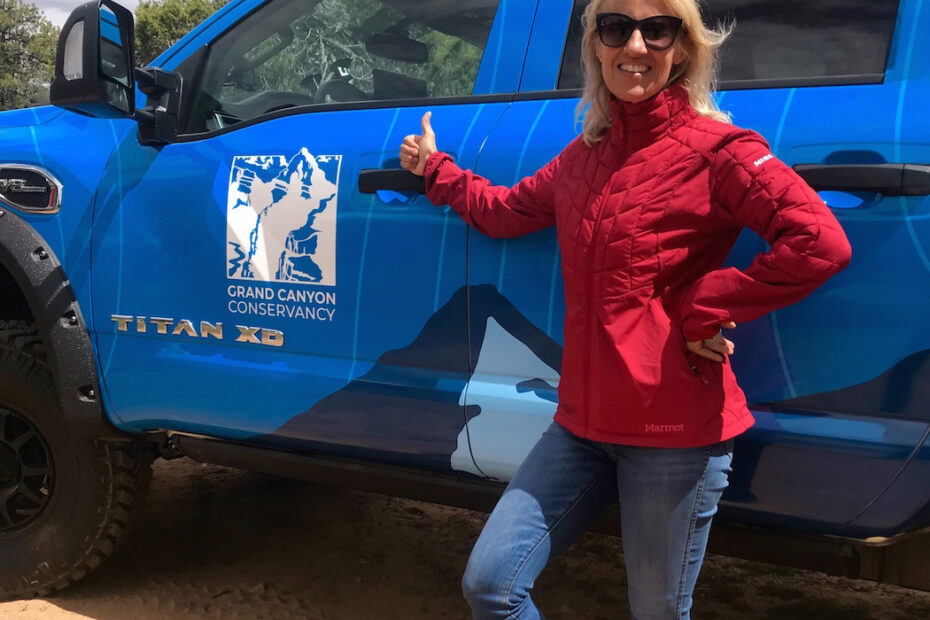 Car companies like to do a lot of talking about new cars and trucks. And that’s always fun. But that’s not everything. What about the places we go to enjoy them? Well, Nissan just took a few (very lucky) journalists on an adventure to celebrate just that. The destination? This big hole in the ground:

It is actually the Grand Canyon’s 100th anniversary as a national park, so Nissan gave it a little present.

Nissan teamed up with the National Park Foundation to donate this tricked out truck and custom trailer (plus some cold, hard cash) to the Grand Canyon Conservancy. They will be used to support the Canyon Field School which enables kids to not only camp near the Grand Canyon, but also learn all about this amazing place.

The truck and its trailer are specially outfitted to help the Conservancy repair trails, haul stuff and build the campsite.

The Ultimate Parks TITAN started with a TITAN XD Gas Pro-4x Crew Cab and added everything the Conservancy needs to be productive in the wild. This includes an air compressor, generator, welder, a 55-gallon fuel tank and a fuel cell. It even has a kitchen sink:

I’m sure many of you outdoorsy types are swooning. That’s why they put it on display at Overland Expo. Badass.

But me, I’m not exactly the outdoorsy type. Sure, I don’t mind getting dirty but camping isn’t really my idea of fun. So when Nissan said we were ‘glamping’, I was hella suspicious. Luckily our camp ground looked like this:

Turns out, I am an excellent glamper. Our trip from the campground to the Grand Canyon wasn’t without excitement either. We drove the whole way off-pavement:

We saw some wildlife:

And we rescued a dog. His name is Benito. We found him wondering one of the dirt roads on our adventure and he spent the day with us as we tried to contact his owners. (Note: the Nissan team is working hard to get Benito reunited with his owners.)

If I’m honest with you, I’ve been to the Grand Canyon several times before. And every single time I go, I’m simply amazed. It is spectacular and we are so fortunate to have it. I’m glad to see Nissan support this glorious place and the good work being done by the National Parks Foundation and Grand Canyon Conservancy.

Now get out there and see it for yourself!