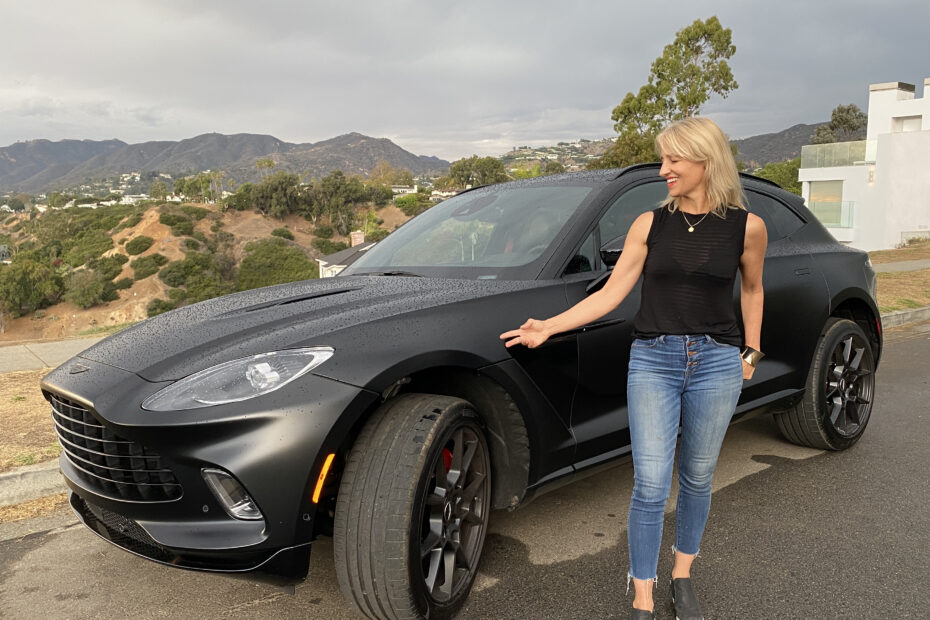 I know what you’re thinking: Aston Martin makes an SUV, really? Then you’re either gonna a) roll your eyes and say ‘That’s dumb’ or b) get excited and say ‘Cool, is it good?’ Either way, the next two things you’ll ask are ‘How much?’ and ‘Does it suck?’ So let’s get that out of the way right now: the MSRP on the DBX is $176,900. The model I drove is $225,686. So yeah, a quarter-million bucks. And yes, it is awesome. It is mind-numbingly, heart-achingly, panty-droppingly awesome.

While an Aston Martin SUV may sound like an anomaly (and perhaps incongruous to the brand), hold on, it’s about to make a whole lot of sense. Think about why the Porsche Cayenne, the Bentley Bentayga, and the Lamborghini Urus exist. Why? Well, making sportscars is expensive. Consider the fact that Porsche has been more or less carried by its SUV sales ever since 2002, when they dropped the Cayenne. Since then, Porsche has produced no fewer THAN ONE MILLION Cayennes. Bottom line? SUVs sell. SUVs sell so well that they can actually keep an automaker in business. But that doesn’t mean they’re bad. How do I know?

My beloved X5m can still blow base 911s and even the occasional m3 off the line at Mulholland Drive. Believe me, I have the speeding tickets to prove it. The DBX picks up where the X5m and the Cayenne left off and goes to a deep, dark, sexy place where few cars venture.

Does it have the cajones of Cayenne GTS? Nope. Does it have the bravado of the Urus? Not at all. But I would willingly sacrifice the stares that come along with the Lambo and the rubber burning achievable with the Cayenne GTS to sit in the DBX’s warm embrace on the regular. Because the DBX is special.

THE ASTON MARTIN DBX IS BEAUTIFUL

First of all, let’s just look at it. Yup, the front end looks a hell of a lot like the Vantage. This is no accident.

I mean, if your sister was Cindy Crawford and they allowed you to pick your face, I’d bet you’d ask for the family profile too. The DBX’s back end, while distinctive, is probably its least exceptional asset and plenty of people hate it. Everything else is so perfect, so I (for once) feel no need to pick on it. The interior is so lovely, so artfully executed that you’ll wonder if it sitting in your car will still qualify as WFH.

THE ASTON MARTIN DBX IS BRUTAL

But just when the DBX has you nestled in her leather-wrapped womb, relaxed and comfy, you decide to step on the gas. It is then, my excellent friends, that she shows her teeth. The acceleration is smooth, the transmission is perfectly tuned, and those brakes could stop a space shuttle. Here’s are some stats:

If you watched the video above, you already know that the one big standout in the DBX drive is its stability. It’s one thing to be able to round corners at 75mph with no body roll. To do it without a three-layer cake and three bottles of wine intersecting is another. Is it alchemy? Certainly in my book.

THE ASTON MARTIN LOVES YOU RIGHT BACK

Then, after you’ve cruised through the canyon, 10 minutes late for a dinner party that you’re all of sudden early for, you put it back in manual mode and shift down. The DBX purrs like a kitten and you roll into your favorite client’s driveway calm, cool, and collected like you haven’t been pulling your best Sebastien Vettel just thirty seconds before. And you’ll give the DBX a wink and know she loves you too. It is beautiful.

DON’T HATE HER BECAUSE SHE’S BEAUTIFUL

So before you decide that the DBX is wrong, shut up and drive it. This is a lot more than a fast SUV. It has a lot more character than a family chariot with leather-wrapped everything. Aston Martin’s first SUV is a special vehicle that I hope lands them up to their eyeball in orders.