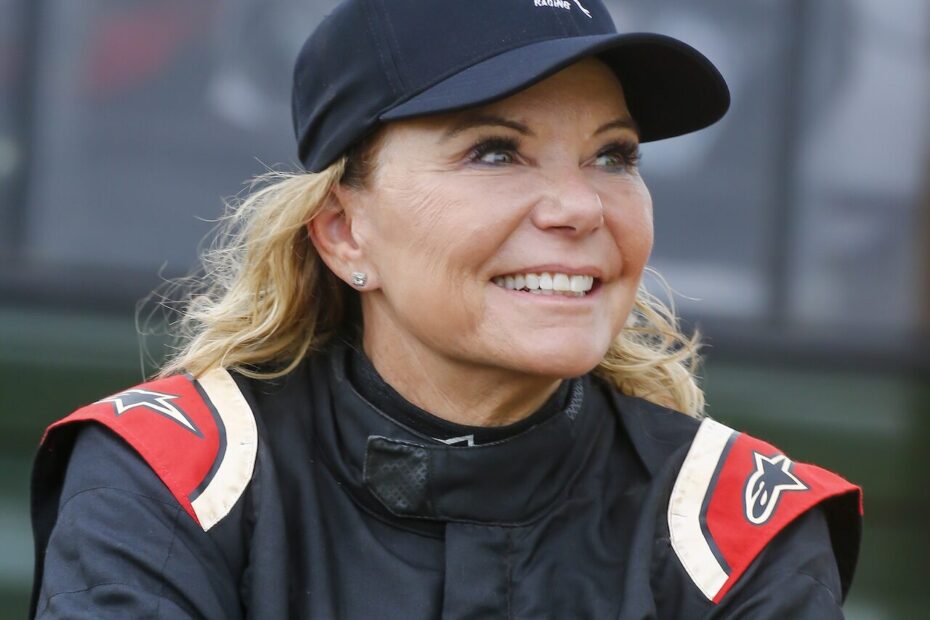 Racing a vintage Porsche around the world sounds like spoiled rich lady stuff. You picture a hair and makeup tent, a personal trainer, and a bevy of photographers to capture the female driver’s every move. It sounds like this woman would be a nightmare.

Then you meet Renee Brinkerhoff.

Humble, gracious, yet tough as nails, Renee is a person who will change your perceptions without jumping and down or throwing statistics in your face. To call her badass is only half of the story.

Starting in 2013, Renée Brinkerhoff has raced her 356 Porsche on seven continents– from Mexico (at the La Carrera Panamericana) to East Africa to the deserts of Mongolia to her most recent race across Antarctica.  Renee uses her platform to raise awareness and funds to combat child trafficking globally.

I caught up with Renee ahead of her Antarctica race to find out what motivates this extraordinary woman. What I found completely caught me off guard.

How did this whole Project 356 start? Did you grow up around cars always wanting to race them or what?

Wait. What? How did this happen?

I literally was in my laundry room folding clothes and I finally had time in my life to do something because I homeschooled our kids. I didn’t realize it at the time, but I was trying to be ‘The Super Mom.’ I was coaching soccer, I was driving everyone, it was crazy, it was nuts. But all of that meant I had no time.

The thought of learning something new, something I knew nothing about sounded awful. Then there were fears of failure and the dangers of racing, all of these hurdles. My life, from that moment, took a massive turn.

It was unexpected, it wasn’t planned. It was a massive surprise.

So there was nothing? You weren’t racing at all or going to car events?

I really knew nothing. I didn’t even know. This tells it all. When I went to my first race down in Mexico, I looked around the room to meet the ladies and to get to know people when another lady in a room of about 80 men. And it was like, oh, that’s weird. And I thought, well, maybe they’re doing registration or something else.

And there was so much going on. It didn’t even Dawn on me. It took me like a year or so to realize, Hey, you’re the only one. You know, there aren’t any other ladies here.

What about your childhood? Did it prepare you for this? Sports or anything?

Yeah, I think that my upbringing gave me a skill set that I think most people don’t have. I lived in places that were very tumultuous. For instance, when I was a little girl, like between two and four years old, I was in Taiwan and my dad was, um, there working with the Taiwanese military.

And that was hard. It was the Cold War and things were intense there. With what was happening with China and the West and all that. We were surrounded by violence and not welcome. Our dog got stolen and beaten. We had broken glass on a wall around our house. Then I lived in Hong Kong during the cultural revolution where there literally, had graffiti saying, ‘ugly American go home!’

Then I lived in Laos during the Vietnam war. My friend’s father got shot down in a helicopter. Another friend’s father died. He was delivering aid and weapons and a plane. He got shut down and died. And we were trying to put these pieces together, but there are B 52 bombers and coups and alarms going off at night. It’s a lot.

It affects you in ways you don’t understand as a child, you know, make who you are. Yeah.

That’s incredible. That also explains why these destinations don’t scare you. Right?

Yeah. It’s hard to get me afraid.

Who has inspired you along the way? And you get to your low points (or maybe you don’t), is there an image or a mantra that kept you going?

That’s a good question. I have a lot of faith in God. So that’s my source, quite frankly. Then I have a supportive family and other people who are amazing. It’s those people, when I’m in those really tough moments, that keep me going.

Right. I would assume that a spiritual element would create a lot of stability because, for a lot of this, you are on your own. It’s just you and God in that car.

And, uh, yeah, drawing upon that, you know, we have, I believe we have a purpose in life. I don’t believe in coincidences. I believe we live it out and there’s a path to follow and those kinds of beliefs. That you hold to help you chart your way and push forward and take the next step.

I will say it found me because I didn’t choose it. When we decided to do project 356 World Rally Tour, we wanted to use that platform to do something bigger and have an impact on change for the better, to help tell people to help those in need.

At that time I met a man, I was on a tour bus. I sat down to start struck up a conversation to the couple across the aisle. And the gentlemen began to tell me when I asked, like, what do you do?

He said he worked for the FBI. And I started asking him questions and he began to tell me everything. He told me that he works undercover and looks for people that are making and using child pornography. So he poses as a customer.

Then he tells me about video footage and photographs of children who were too young to tell their parents or those who care for them– five, six years old, and younger! Then he tells me how prolific it is and what a problem is. And of course, I’ve got a thousand questions and I followed up with him on email and learned more.

And then he, you know, through my talking with him, he explains to me how this links to child trafficking. Because the images create this appetite, right? And this sickness plays out into people buying kids. Adults buying kids for sex.

Then I had another encounter. I was on another bus going to pick up a rental car and I sat down next to a man. And on his phone, I just looked over, he had a pornographic image of a child on his phone.

As soon as I looked over, he clicked away. And you know, how you get feelings that people are dark and terrible? You’re thinking something’s wrong here. That kind of thing? But then it became obvious. I’ve had these two experiences. What are you going to do?

Then I focused on learning about the issue and what’s going on and, then, and then finding out how you, how one can help and what that looks like. And that was the beginning of all of this.

No coincidences. Those are the things we want to ignore in life but shouldn’t. Right?

The weather is the key component. It is their summer. Even that being said, that’s all daylight, but it’s still can be minus 40 degrees. You can still get winds up to 190 miles per hour. You know, one moment it can be all sunshiny and blue. And within literally moments, you are in the worst storm of your life, where it creates sheets and walls of ice that you can’t even see.

And then there are the crevasse fields. You have to think about crevasse fields. The car doesn’t have a heater. Okay. You’ve got to dress warm and, uh, keep your little toes warm so they don’t freeze– you need to feel the pedals and, um, and your hands, of course, when you’re driving.

Right. And have you met with other racers who have done this before?

I have. One person and that’s the guy sitting in the car with me, actually two people Kiran and Jason. They both live in the UK.

They have the world record for driving through the South Pole and they did it in a modern vehicle, but they engineered that car. Karen engineered it, an amazing guy. He’s also created some wild contraption to have a world record going across Mongolia with wind and something. And then Jason, who has an immense history of being on the ice in both polar regions, he’s cross country ski to the polls. He’s led groups to the poles and he’s had set two world records to the pole, the South Pole. He’s in the car with me. And the thing is because he’s cross country skied it. That means he knows what he’s looking at.

I love that you’re doing this. Assuming you accomplish this, which after spending 20 minutes with you, I’m pretty sure you will, what’s next?

People look at that car and say, Next up the moon? I don’t know. I have some ideas. Okay. I think, you know, what, what we’ve done is we use our racing to raise awareness and response, right?

I don’t know. I have some idea. But after this is finished, I’m going to get with my daughter, Christina. She works with me on all this. We’re going to talk it through. We’re going to bounce stuff off the wall. Like what can we do now to continue raising money, raising awareness and helping kids that are being trafficked?

How can people who are interested in this cause support you?

Go to our website: www.valkyrieracing.com and donate what you can. We have no salaries, no overhead, no fees. Everything goes towards the most effective organizations we find. Frontline organizations have an actual impact on the lives of young boys and young girls that are either potentially going to be trafficked or are being trafficked or have been trafficked.

Why is it called Valkyrie Racing?

Valkyries come from Norse mythology and they’re women warriors with compassionate hearts and they leave Valhalla was, which is the name for heaven.

They go to the battlefield and they rescue the wounded and the dying. Then they take them back to Valhalla and restore life. We thought, gosh, doesn’t that sort of in capital encapsulate, what we want to do, who we want? I love it. I just think it sort of says it all.

This was a very special interview. I thank you.

Amelia. Thank you. I really appreciate it. Thanks so much.

You know, you’re not what I expected. And I love that.

Really, what did you expect? That’s so funny.

A lot of women in a male-dominated space become so hard and masculine. And that can be great. And that works for a lot of people and that’s how they move forward. But you, you’re uniquely feminine in a beautiful, very strong way.

It’s a difficult balance. What’s interesting is that in the sport, the Latin American men have been the easiest for me to deal with.

You wouldn’t think so, right? A hundred percent, but when you’re beating them on the road, you can do the respect they have for you is amazing. They have this whole matriarchal society where they really respect their mothers. They are the most supportive. It’s culturally very interesting. Of course, Westerners are the most difficult.

I am a middle-aged female automotive writer. I’m very familiar.

Thank you for your time, Renee. You’ve truly inspired me.

I’m delighted to report that after this interview, Renee and her team went on to do the impossible: 356 miles across the most extreme frozen continent on the planet – the interior of Antarctica.

I hope her story inspires you too.