Dude or Dbag: The Outfits of Pebble Beach 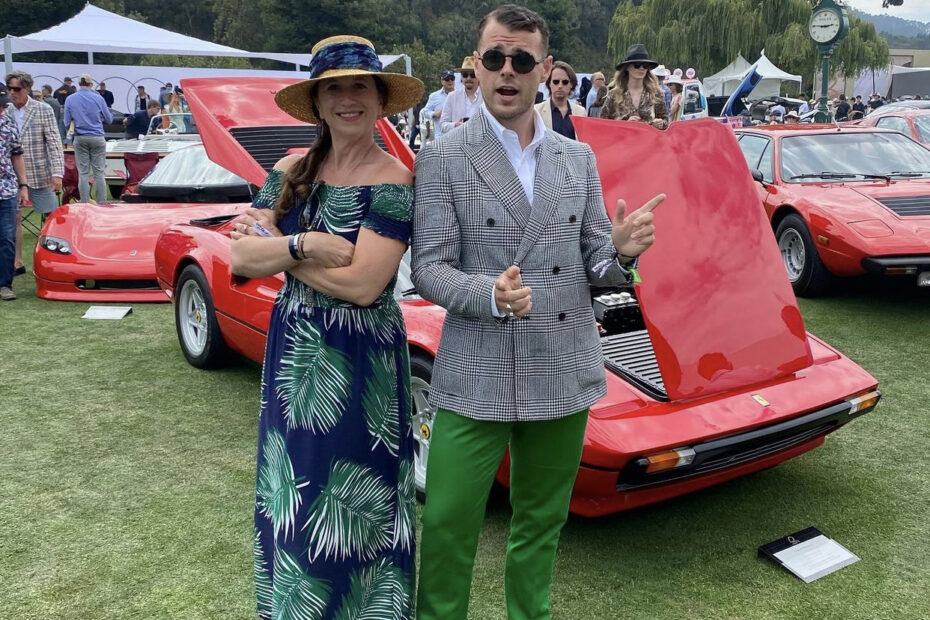 The world is awful right now. Fires. Afghanistan. COVID. Writing about who wore what at the Pebble Beach Concours d’Elegance this year seems frivolous, silly, indulgent. I should just abstain. But, on the other hand, nah.

If you’re not familiar with “Pebble”, here’s a quick rundown. Located around the tony seaside towns of Carmel, Monterey, and Pacific Grove, Monterey Car Week occurs every August. Fancy people descend upon the area for all things automotive- record-setting auctions, vintage vehicle races, shows of all kinds (my fave is the Concours D’Lemons ), and parties, parties, parties. The Concours d’Elegance is the cherry on top. I’ve heard it the whole shebang described as “Sturgis for Billionaires”, which is not only hilarious but frighteningly accurate. Spectacular in every sense, there are beautiful cars, beautiful people, and even beautiful dogs, with everyone acting like the world is not a dumpster fire.

Pebble is also a place to be SEEN. So what you wear is important. And we are here to judge. So let’s just start with a glorious baseline. This is how you do Pebble:

Look at that woman- her hat, her shawl, her shoes. She’s perfect. Her outfit is simple, clean, and dare I say..looks kinda comfy. And her other half? He’s chillin’. He’s not like ‘LOOK AT MY MISTRESS AND HER DOUBLE Ds!’ He’s like, ‘My wife is attractive. Let’s look at cars.’ I dig it. They are both complete Dudes.

But sadly, not everyone got that memo.

PEBBLE beach IS NOT DA CLUB

Let’s start with the obvious. Ladies, kudos on the effort. You donned your Spanx, got your hair blown out, nails done, and then applied enough self-tanner to make Trump look pale. But this is a car event, not da club. Cleavage is not part of the entry fee.

Now fellas in the background, I’m not letting you guys off either. I think it’s great that you feel that you can show up to an evening event in a ball cap and running shoes. Maybe if your khaki’d asses stick together and suck down some free champagne, this won’t hurt a bit. But nope, sorry. Do you see the amount of time and effort those little flesh biscuits put into getting ready? Sure, they’re excessive, but you could’ve at least tried. Five bucks says you didn’t even brush your teeth. Shame on you.

PS–These dogs spent more time getting ready than you did.

Officially, I think putting outfits on animals is ridiculous and cruel. Unofficially, if I could get my Great Dane to keep this get-up on her enormous rump for 30 seconds, I’d own three because these little doggies look fantastic.

VELVET AT PEBBLE BEACH IS TRICKY

Let’s talk about velvet. It was all over Pebble this year and sometimes it was done right and sometimes it wasn’t. I was raised to believe that wearing velvet has strict guidelines. Rule #1: you just don’t wear velvet in the summer. But these days, there are a few scenarios where people can make it work. This isn’t one of them.

Excuse me, sir, Prince called and wants his wardrobe back. Not a fan.

Then there’s this guy whose green pants are rad as hell.

But the daytime royal blue velvet jacket? Nope, not feeling it, sorry. That’s why the baby Jesus gave us linen. What I am digging, however, is the guy to his right with the sideburns. Those are classic, plus I can respect a man who knows that damn well that daytime loafers are to be worn without socks. Thank you, sir, carry on.

You know what’s not to be worn on a golf course? Stilettos. That’s right. Unless you’ve been hired by Pebble Beach Golf Links to be the slowest aerator on the planet, it’s simply not an efficient use of anyone’s time or money. Somebody should have told that to Ant Anstead so his girlfriend didn’t have to hop her way around the fairway.

Is that Renee Zellweger? I have no idea. I’m not TMZ. I’m just a woman looking at another woman being dragged around a golf course and wanting desperately to help her. Otherwise, they look lovely.

You know who else looks lovely? These two.

The lovely and talented Kristin V. Shaw learning how to ham it up with Zachary Weiss, a dude who clearly knows a thing or two about double-breasting. Don’t miss his footwear, which I found on Instagram and confirmed that yes, they do say “Boogie Shoes.”

God bless you, sir. Sidenote: I understand these are velvet, but they are clearly exempt from all d-baggery because they are awesome. Period. You know who else is exempt?

HOW TO BREAK THE RULES AT PEBBLE BEACH

Jessie Pinkman, that’s who. Or if you’re a fool and have never watched Breaking Bad, maybe you know him as the actor Aaron Paul. He’s a man whose attitude makes anything work.

Sure he’s dressed head to toe in black, in the daytime. Yes, that jacket’s sheen implies that it is indeed velvet, but Mama don’t care. He’s smiling at a pretentious car show and admiring that gorgeous Mercedes EQ. Complete dude.

THE ONE OUTFIT THAT ALWAYS WORKS AT PEBBLE BEACH

Do you know what else is wonderful? Wearing something big, flowy, and fearless while you push your doggie stroller across the putting green. Could the dog use a bath and perhaps a comb-down? Sure. But any woman that smiles that big at strangers gets my unquestionable stamp of approval. Because we all know that the world’s best accessory, at Pebble or anywhere else, is joie de vivre!

Did you go to Pebble? What did you wear? If you dare, leave your outfit in the comments below or tag me on social and we’ll tell you if you’re a dude or a dbag.