Freak Of The Week: Creature Club 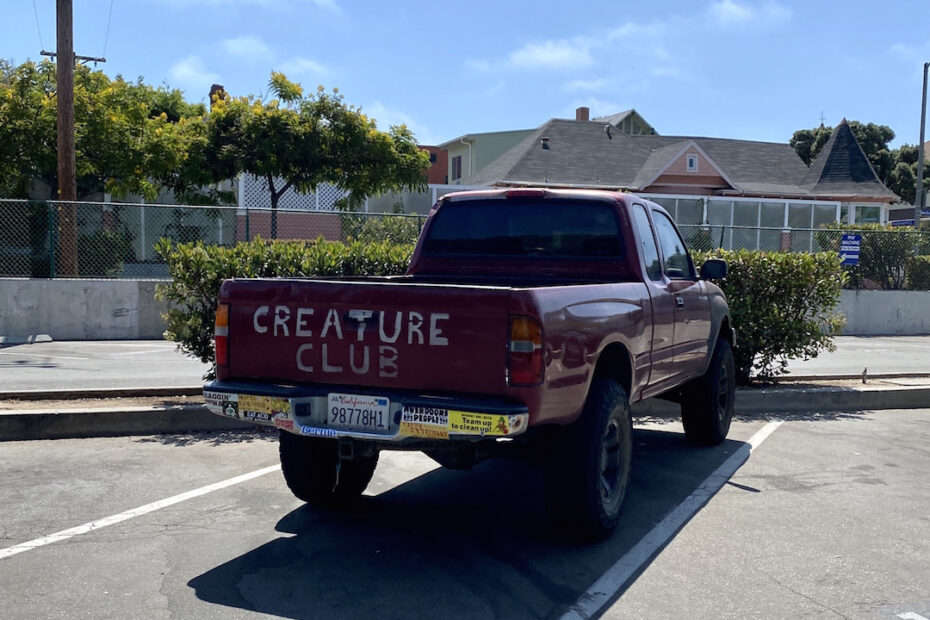 A few days ago, I went to Main Street in Santa Monica, one of my favorite places for car spotting. There’s always at least ten resto-mod Broncos, a few dozen Silicon Beach supercars, and because of its proximity to Venice, Freaks abound. This truck in particular captured my attention because it is adorned with some of the most unexpected and refreshing messages that I’ve seen in a long time. Let’s go!

The first indication of his freakiness is clearly marked on the tail gate. Most kids choose to lose the TO and then the TA to just reveal the YO, a move which frankly never gets old to me. Not this kid, he has eschewed any and all greetings in favor of two words: Creature Club. Of course, my 80s brain assumed that this was a misguided reference to the brilliance of Boy George and Roy Hay. However a quick web search revealed that Creature Club is in fact a podcast “all about the monsters in Dungeon and Dragons.”

I’m gonna give you a moment to let that statement’s impact wash over you. Not just a podcast, but a podcast about D&D, and specifically “all about” the monsters in D&D. Any person who decides to deface their tailgate in honor of what is quite possibly the dorkiest subject matter of all time is clearly 100% certified awesome.

The second most prominent message on this truck reads “Mushrooms are People Too.” At first, I was a little worried. How many hallucinogenics does one have to ingest to acquire to state of mind? But then I saw the .com at the end AND I LOOKED IT UP! Would you believe it’s a guy in the Pacific Northwest who makes limited apparel celebrating the “complete radness” of his environment? No mission statement has ever sounded so Pacific Northwest, ever. And yes you should absolutely watch his video:

Is our boy in Santa Monica a close friend, a relative or simply a supporter? Who knows but this new layer of complexity to this character has me hooked. Here’s what else I know about him: he’s young and recently moved away from home. Why? Well pretty sure his mom wouldn’t let him adorn anything in her driveway that reads “Eat Acid Not Animals”:

Yet he’s got a sticker that reads “Meat Is A Superfood” and one that says “Powered by Plants” so there are some conflicting messages, perhaps induced by new love interest or a rebellious reaction to his parents carnivorous tendencies. Who knows. But one thing is clear, this kid is a full blown atheist:

The other thing I know is that he recently got a girlfriend and she’s been to Australia:

Notice the super-dope Shaggin’ Wagon sticker whose full message is usurped by the Big Sur yoga man? So sad. But when your lady comes back from a semester in Perth (perhaps as a freshly minted vegetarian) and finally understands that your groovy sticker is not referencing a scruffy hair do, she’s gonna insist you retract it. And because of that, we all lose out.

So if you see this magnificent vehicle rolling around the Westside, give him a thumbs up or a high five or if you’re really brave, tune in to Creature Club, I have a strong feeling it’s anything but dull.