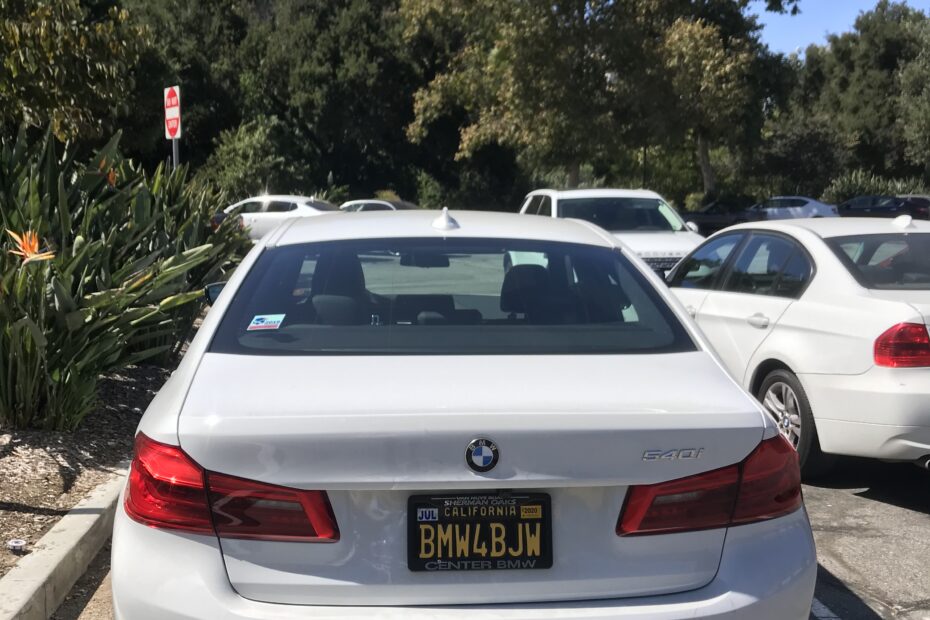 Many states have waiting periods for life-altering decisions. Things like marriage, divorce, or purchasing a fire arm. It’s smart. The message is ‘This is a big deal. Let’s make sure you really want to do this.’ I’d really like to see the same standards enforced at the DMV. Specifically in case of Vanity Plates. They can be just so awful and maybe if people had time to think, perhaps they’d reconsider. If you think I’m being dramatic, I’ve gathered six clowns to prove you wrong:

Oh buddy. This isn’t New Rochelle. Being a stock trader in LA is the equivalent of being a tv producer in New York (ask me how I know), it’s something you really shouldn’t even mention at cocktail parties. In polite conversation you can dance around it by stating, “I’m in finance” and then handle the blank stare appropriately. Maybe it’s cool back home, but in LA being a trader is not a profession you let out of the bag, not to mention plaster on the back of your Beemer (twice). If you’re wondering why you’re not getting laid, this is it. And don’t get me started on the “Gye”..

I know it’s not really new or odd for LA dbags to put fashion labels on their plates. But this one really gets me because IT’S ON A JEEP GRAND CHEROKEE. What in God’s name is happening here? If it was on a Lambo Urus, I’d just roll my eyes and walk away. But the Jeep? What went wrong here, honey? Who hurt you so badly that you took your previously off-road capable ride and ruined it with the Gooch? It makes me truly sad. Maybe if you had roughly 36-72 hours to reconsider, you’d come to your senses.

I’ve written about this before and am sure as hell not going to stop now: Why do ALL Tesla owners feel obligated to Vanity Plate? From MUSKFAN to BYBYOIL to THXELON, it’s just revolting. They need a support group where they can talk through this terrible impulsion, perhaps at the Supercharging Stations. I’d be the first volunteer to counsel them away from bad choices. For example, FUTRPRF. Ok pal. That’s about as valid as the usefulness of your damn wing. Yeah, I know, downforce brah.

Cash 4 Clunkers? Meet BMWs 4 …what? OK, well, who am I to judge how you scored your German luxury vehicle. But confessing it on your plate is a pretty bold move. It’s one that you really should have run past with a few trusted advisors before stamping the tin. On the off-chance your initials really involve a B, J, and a W, well then by all means blame your parents but lay off the monograms.

I almost want to throw this guy a bone for tricking out a Prius, but…nah! Especially with the chrome side rails and the front wind guard. If that’s not wishful thinking, I dunno what is. As for the plate, anyone with a pulse knows that the Prius is a hybrid. and a dorky one at that, so it’s really best to keep that thought to yourself.

The i8 is such a beautiful car. And I kinda almost dig the 808 play on words..whether they’re talking about the drum machine or Hawaii’s area code doesn’t matter, it’s kinda cute. But you lost me with the Penny board. Not only is it just too strategic, especially with the straps, it’s a well documented fact that 100% of grownups look douchey on Penny boards. So while your vanity plate stood a chance, that side portion of Penny board truly makes us all think twice. No, my DMW strategy wouldn’t have saved this one but maybe this post will.

Seen something offensive in your hood? Has somebody plated their car with something truly awful? Of course I want to know! Hit me up on Twitter, Facebook or Insta..