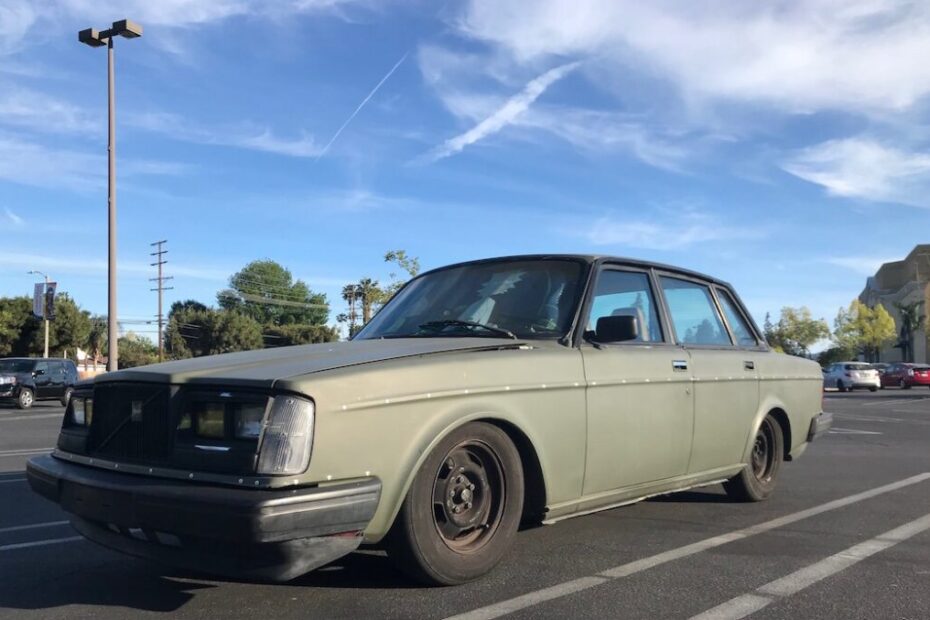 How many of us got hand-me-down cars when we were teens? I know I did. Mine was from my grandparents– an Aries K station wagon (and it was awful). Many of you have told me that your first car was your Mom’s hand-me-down Volvo. Safe, practical and relatively cheap to fix, it’s a solid choice. But what happens in 2019 when you get Mom’s Volvo sedan while every kid spoiled kid in your neighborhood gets a brand-new Jeep? What does a Gen Z kid do with that?

If you’re one particular kid who works at the Fallbrook Mall in West Hills, CA, you do amazing things. This kid is nothing short of a genius. He took what was probably a $1,000 car and put about $50 in customization in it and made it fantastic. I hope his peers who are are blowing their first paychecks on modifying their Scion tCs take notice. I mean, just look at these details!

Military Matte Green For The Win!

First of all, there’s that color. Sure, you can order that directly from the factory at Mercedes. Or just do wrap, there’s plenty of that. I see this color often on Jeeps, Mustangs, Sprinter vans and the FJ Cruiser. But the Volvo sedan? Didn’t see that one coming. Touche, young blood, you’ve done well. But he doesn’t stop there..

He may be young, but he’s not clueless. He knows that flat paint gets boring without a little contrast. A boy with less creativity and deeper pockets could make a bad choice– like a carbon fiber wing, obnoxious chrome wheels or one of those lame military decals. But not this guy, he invested in stainless steel rivets. Oh yes he did. It may have cost him $12, but he knew it was worth it! Don’t be surprised if see these standard on the XC90 next year. Too cool. Then there’s that grille:

Fire Up That Grille!

The matte black grille isn’t an unusual choice for a vehicle this color, but there’s something about that diagonal bar– seeing it in this shade shows it off like never before (see another winning Volvo here). Then he got those contrasting headlights. Lovely. And of course the rivets go all the way around– he’s not a Neanderthal!

Sure, if you look closely, the barb-q black is scratched off a bit. His wheels are a hot mess. And I’m about 1000 percent sure that the inside of this car smells like feet. But that doesn’t mean it isn’t great. Because this is a kid that knows exactly what he’s driving and he doesn’t take it too seriously.

No, I’ve never met the young man that drives this car. Sure there’s a possibility that he’s actually a 65 year-old purple -haired grandma who is currently restocking the crafting department at Michael’s with readers hanging around her neck. She very well could be. Or maybe this person is the gum-smacking Millennial that hands this Maxxinista the number cards at the TJ Maxx changing room. She is certainly into fashion. So why, oh why, can I be so damn sure that it’s a young male driver? Well because Rick and Morty don’t lie.

previousWhat’s The Deal With Karma Automotive?
next2019 VW eGolf: The Enthusiast’s EV