Freak of the Week: Sparkle Fusion 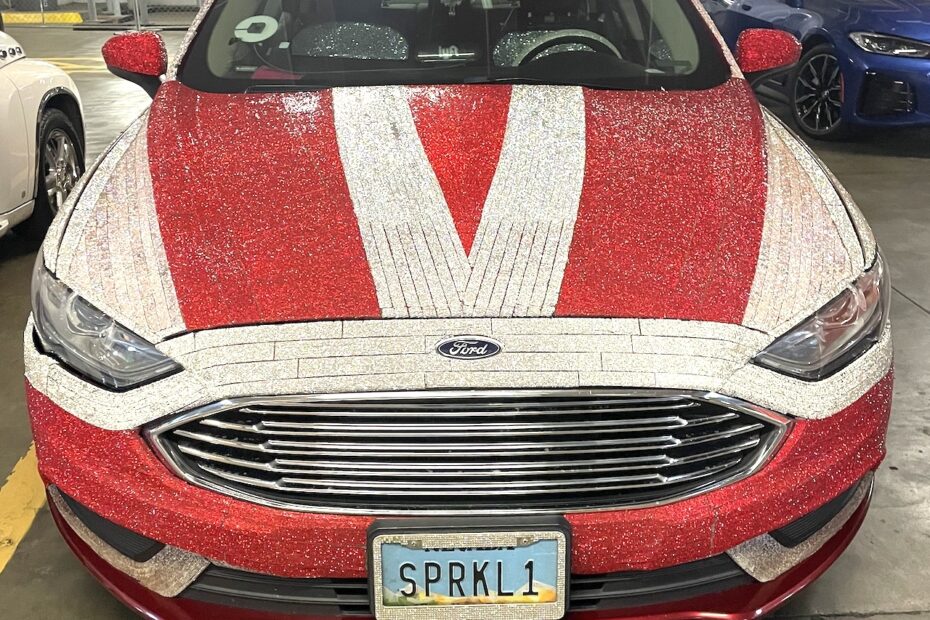 Los Angeles is a magical place. I’ve said it once. I’ve said it a million times. One of the many reasons LA is so special is that it is jam-packed with weirdos. If you think that’s disturbing, you’ll probably want to click away now because MHM is all about embracing the freaks, the outcasts, and the weirdos. And what do weirdos do in a city where your first impression is your vehicle? We get freaky with them. Behold! My Freak Of The Week–The Sparkle Fusion.

The Sparkle Fusion Makes An Entrance

It’s not easy to stand out in a city where six-figure vehicles are the norm. Especially when you’re driving a boring hybrid sedan. But if you take that sedan and transform it into a rolling disco ball, you’re likely to turn heads.

And where do you think this rolling mood enhancer was spotted? At the Mark Taper Forum Performing Arts Center’s parking lot. That’s right, I know this may come as a shock, but the owner of this vehicle is likely to be a PERFORMER! But in this town, who isn’t?

The Sparkle Fusion Ain’t No Prius

Just in case you missed it, this Ford Fusion driver wants to be sure you know that it’s not that other ubiquitous LA hybrid. No, ma’am, this one is special.

The Sparkle Prius Has A Message

If you look closely, this vehicle is also packed with wisdom. No, not just of the Seattle Seahawks variety. A sticker on the side reminds you, “Don’t Let Anyone Dull Your *Sparkle*.” Wise words, indeed. As is this:

You, Too, Can Ride In This Masterpiece

Like any good mother, I’ve saved the tastiest morsel for dessert. And you’ve been good little doggies, so here’s the kicker: IT’S AN UBER! And a Lyft, too. Can you imagine having just wrapped up a boring first date, ordering a sad, solo ride home, and then being greeted by this treasure on four wheels? Brilliant!

Well, I told you LA is magical.

For The Grand Finale

I Googled this car and found a news piece on it that features the driver! Now, if anyone has an idea about how I can get in touch with him, hit me up!