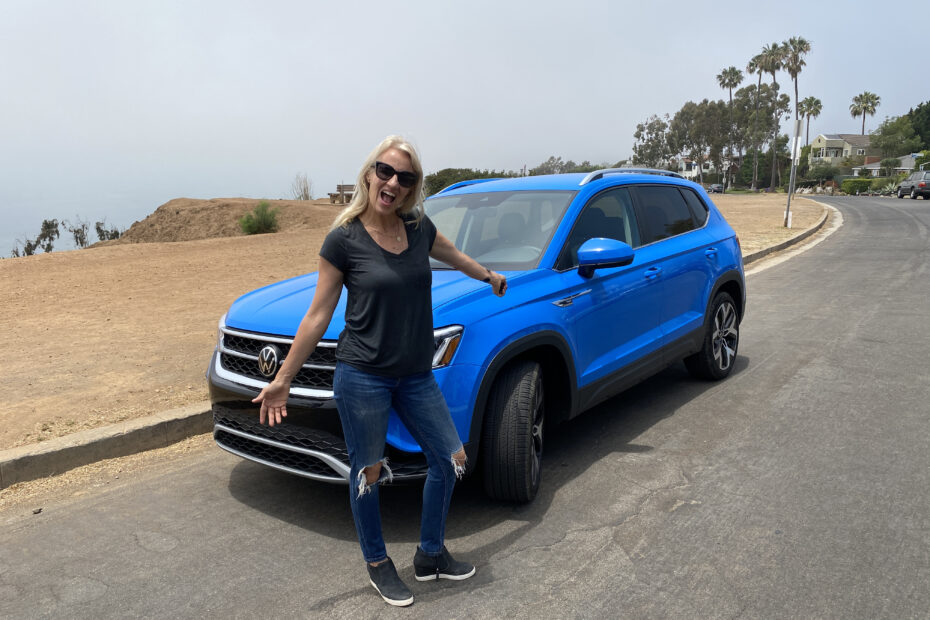 People always ask me what SUV they should buy. Before I get into their budget, their family size, their EV tolerance, etc, I often ask if they have driven any VW SUVs. Because, to be honest, it’s hard to go wrong with any of them.

But unlike a few years ago, when it was a simple choice between the Tiguan and the Touareg (plus remembering which was which), there are a lot more models to chose from. The Touareg is gone in the United States now, but in its place is the Taos, the ID.4, and the Atlas. Let’s get into which one is right for you.

New for 2022, is the delicious, bite-sized, compact SUV called the Taos. It looks great, drives really well, and has that honest, straightforward, Volkswagen sense of non-luxury luxuriousness. Of course, you know what I’m talking about, it’s not cheap, it’s just not pretending to be fancy. I respect that.

What I’m not that into is its engine, which to me, felt a tad underpowered. Because I know a lot of you are thinking ‘oh this is a good starter car for my kid’ or a ‘good small car for grandma’, I want to remind you that defensive driving can sometimes require some torque. This is also, not coincidentally, what I say every time I’m pulled over for a speeding ticket.

But honestly, I wasn’t crazy about the turbo lag or the fact that when I filled it with passengers, it just couldn’t keep up. So look at how/where you drive and the trim level before you get too excited.

The Tiguan is honestly the easiest vehicle for me to recommend. I never hesitate to tell someone to try this or the Volvo XC60, because they’re simply awesome cars.

VW didn’t make a lot of changes to the Tiguan for 2022 and for good reason, the car is brilliant and sells like hotcakes. But you may notice:

I get into it all further in the video, but it drives so well, has so many standard safety features, and is just so smart overall, give this baby a try, especially if you have a growing family.

THE ID.4: AN EV TO CHANGE MINDS

Speaking of not trying too hard, the ID.4 does what I’ve been waiting for an affordable EV SUV to do for a while, just be an electric version of itself. Duh. Let’s not make this into a big deal already, let’s just plug it in. The Volvo XC40 Recharge does this as well, but most are trying so hard to be cool, they forget that we have to drive it and some of us are really nervous.

This car is still eligible for the Federal Tax Rebate and, more often than not, your state will throw some money at you too.

The interior of the ID.4 is really impressive and beautiful. With a range of 249 miles and a beautiful, streamlined presence, it’s hard not to get excited about this VW SUV (EV). Read my full review here.

THE VW ATLAS: BECAUSE YOU GOT STUFF

I like to play a little game with the Atlas. Step one: don’t think about it. Then drive around. Good. Step two: think about it. Drive around now and BAM! They’re everywhere! Sure, that is a trick you can play with anything, but the Atlas is particularly capable of camouflaging itself because sometimes you think it’s an Audi (duh, they’re first cousins), sometimes you think it’s a Mercedes, and sometimes, you’re thinking ‘Damn, that looks good. What is it?’

Plus, the VW (again) doesn’t lie to you (insert Dieselgate joke here). It isn’t trying to fool you into thinking it’s a Q7, because it’s not. The leather is easy to clean (read rough), the finishes are simple (read often plastic) and the set up is simple (read simple). But does that make it bad? Hardly, it makes it a wise choice for someone with kids, dogs, and..stuff.

If you’ve bought a VW SUV lately, let me know how you like it and why in the comments!