Revenge Of The PT Loser 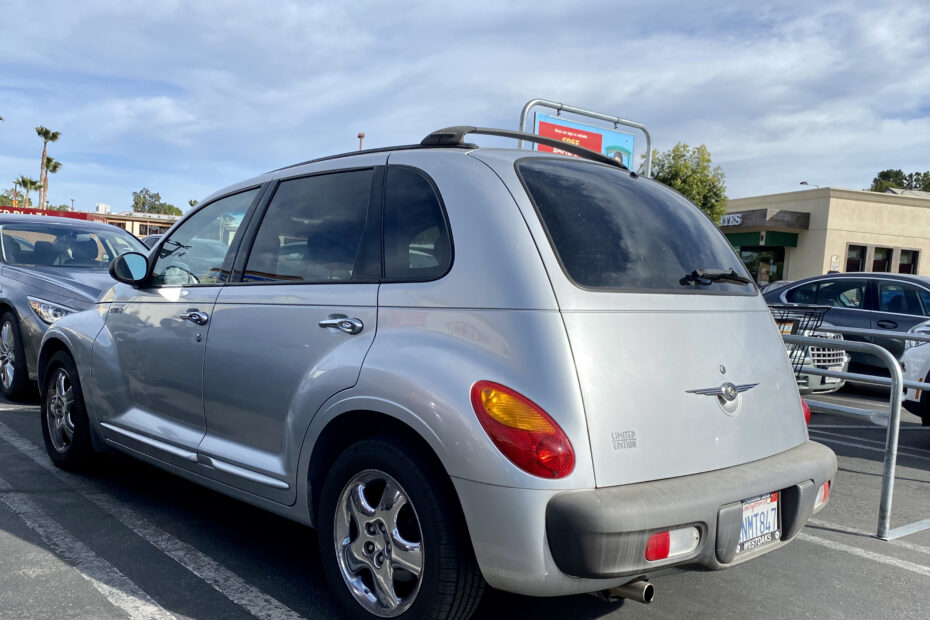 I have a friend who is a nerd. Ok, I have lots of friends who are nerds. What can I say, I like nerds. But this guy is that lucky, special kind of dork who spun his childhood computer obsession into a tech empire. So now, he’s a rich nerd. When I first met him, he was very busy collecting all the trappings of new wealth– the big house, the hot first, second, and third wives, and of course, the red sports car.

The car was the first-gen Acura MDX. So cool, so fast, so special. He was really proud of that car until one day, he told me and my (now) husband to come over because he had just bought “a doozy of new ride.” We were thrilled. We zoomed over there while visions of Ferraris, Lamborghinis, and Paganis danced in our heads. We rolled slowly into the driveway only to find this parked out front:

Yes, this highly intelligent, perfectly car-literate man, the guy for whom money was no object, purchased himself a Dark Plum Pearl PT Cruiser. My partner and I looked at each other in dismay then reached deep to find our most convincing fake smiles in order to power through what was bound to be an excruciating afternoon. It turns out the car wasn’t bad, but it sure wasn’t great and to this day, I see it as a weird decision. Almost as weird as wife #4, but that’s for another blog.

And I know I’m not alone. For so many of us, that car was a joke. It was an embarrassment. It was a Please Grandpa, Drop Me Off Around The Corner From The Mall kind of vehicle. But lately, I’ve noticed that the PT Cruiser, affectionately dubbed The PT Loser, seems to be once again having its day in the sun.

I see them out and proud at Target:

I see them looking classy in Calabasas:

I see them personalized in the Palisades:

I see them pt cruising down PCH:

I’ve seen them so often, in such well maintained condition, that I began to wonder if some type of resurgence was brewing. But last week, when I witnessed Twitter thread of automotive journalists going gaga over a PT auction on Bring A Trailer, which wasn’t even the GT turbo, I realized that the unthinkable had finally happened.

The PT Cruiser became cool. Like mom jeans, suspenders, fanny packs, side ponytails, and other styles we wish were DOA, this hideous car just slithered its way back into the Zeitgeist and it’s pissing me off.

I can’t stand its retro styling. I can’t handle those enormous wheel wells. That atrocious excuse for a convertible makes me want to hurl. And I’m not entirely against ugly vehicles. But unlike other awesome uglies like the Pacer or the Eagle, this is a type of unattractive that I simply can’t endorse.

I’ll admit that to owning mom jeans, I’ve been known to rock some suspenders, and my fanny has seen a pack or two, but I still refuse to get on board the S.S. PT Loser. Sorry boys, that ship has sailed. What about you? Are you pro-PT? Or does your stomach turn every time you see one too? Even better, do you own one? Mama wants to know. Hit me up on social, tell me in the comments, carrier pigeon, I don’t care, just please enlighten me.