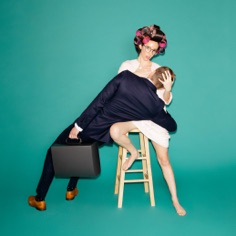 With Labor Day fast approaching, it’s time to prepare for that question that all parents get around nebulous holidays, “What Is Labor Day, anyway?” So here are a few songs to spark conversations around work, career fulfillment and, of course, bra size.

Most kids aren’t required to bring home the bacon, so it may be challenging for them to understand the perils of the average working girl. But you know who can make it out abundantly clear? The Queen Of Country.

You may remember this as a hokey song. You may think of the movie as dated. But it was also one of the most honest portrayals of women in the workplace and it was done with humor plus an irresistible soundtrack as only Dolly can do. And because the film is about to be remade with the original stars , your kids will be ahead of the game once they are down with the song. Disclaimer: Dolly’s bra size is prone to overshadow any other conversation. Just go with it, boobs are important too.

Boyfriend & Galactic: Bring It To Mama

At first, your kids may be fooled into thinking this catchy, campy tune is just about a gold-digging woman on a rampage. But then she digs in, “Am I asking for too much love?..I still make 80 cents to your dollar, bring it to Mama!” giving you the perfect opportunity to discuss the pay gender gap or to teach your girls how to ask for a raise. Disclaimer: there are several, albeit well-placed, curse words in this song. But sometimes any substitute for ‘bullsh*t’ is just that.

Disclaimer: this one may open up discussions about more than just Monday malaise. Many of us just remember this as the song that every 80s DJ played on Monday mornings and that one Bob Geldoff song we knew before Live Aid. However, the origin of the tune is much darker. Geldoff wrote the lyrics after hearing the devastating news about a 1979 school shooting in San Diego. He was particularly shocked by a quote by the perpetrator, 16-year-old Brenda Ann Spencer. When asked why she went on a rampage that killed 2 adults and injured 8 children, Spencer replied, “I don’t like Mondays. This livens up the day.”

Obviously, how much detail you give to your kids depends on you. But the overall lesson is a solid one– many of us don’t like Mondays. So let’s talk about it before somebody does something stupid.

If you have little ones, this song will make them crack up without really swearing. It’ll be hilarious but will also give you an opportunity to tell your favorite work-mare tale and to warn your children about the hazards of working for an a**hole. If your kids are particularly high strung, try the Dead Kennedys version– head banging will ensue.

And before they ask why all of this is important, why doesn’t everyone just quit a job if they hate it, you bring in Brittany Howard.

Make sure you turn it up when Brittany bellows this:

Living ain’t no fun
the constant dedication
Keeping the water and power on
There ain’t nobody left
Why can’t I catch my breath?
I’m gonna work myself to death

And they’re giving you lip about emptying in the dishwasher? Time for a serious reality check, kids. Oh and if you don’t want to be singing one of these songs in the next few years, keep your ass in school.

So good luck with that ride to that Labor Day bar-b-que, I hope this playlist will help you capture that teachable moment. If you have a song that your parents used to teach you something, share it below. Cheers!