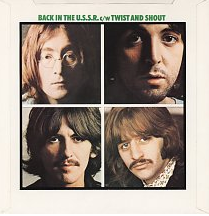 Up until now, avoiding Putin was easy. He was like measles or Boa constrictors—still around somewhere, but unlikely to cause havoc in our daily lives. But then he went and invaded Ukraine, like a dick.

Parenting through this conflict is undeniably prickly, especially when you’re a Cold War kid like me. I’m having serious 80s flashbacks of the apocalyptic variety. So to help all of us talk our kids through our complex relationship with Russia, I put together a fun little playlist of classic tunes from our last Slavic shitshow.

So grab your offspring, spend $500 on a tank of gas, and go for a drive with these tunes cranked up high.

The Beatles wrote this song after arriving home after a tour in the former U.S.S.R.. This gives you a great backdrop to talk about what the Soviet Union was and that there is actually are living conditions worse than Snapchat being down. Don’t worry, the Beatles make talking about Putin a little less painful, and give special props to the Ukraine.

Looking to explore our collective xenophobia? Why not enlist the help of this old fart and his pro-Slavic anthem? In fact, Sting just recorded the tune and posted on his Instagram, which may legitimize it in your kid’s eyes.

However, the lyrics may need a little bit of explanation:

Mister Krushchev said, “We will bury you”
I don’t subscribe to this point of view
It’d be such an ignorant thing to do
If the Russians love their children too

At this point in the drive, your kids will think you’re an ancient, crazy monster that had the audacity to grow up in a time with communism and zero Internet. So maybe you need a song to remind them that every generation has its struggles. Like this one:

Unfortunately, that’s a terrible song. So let’s move on.

Leave to Prince to break your heart in six lines:

In France a skinny man

died of a big disease with

By chance his girlfriend

came across the needle

and soon she did the same

Prince recorded this song in 1986, in the middle of when we (thought) were at our darkest hour. Now that we are here, we know that these terrible issues are cyclical and every generation has its cross to bear. Don’t miss this opportunity to remind your kids that if Prince had Tiktok he couldn’t have performed all the vocals and instruments on this single himself.

Shortly after the Sign O’ The Times album came out, a little thing called Perestroika occurred. The world felt like a better place and we were all filled with optimism and hope for the future.

Jesus Jones captured our collective glee and dropped this track in 1990, just three years after Prince’s dark masterpiece. It’s a great reminder that things can change for the better, quickly.

I saw the decade in

Wishing the world would change

In the blink of an eye

If anything, then there’s your

Tears for Fears- Everybody Wants To Rule The World

At some point in this conversation, your kid is gonna ask about the elephant in the room. “If the former Soviet Union was so bad, why does Putin want to invade the Ukraine?” And you, being the brilliant parent that you are, will leave this complex explanation to the experts—Tears for Fears. In addition to articulating the roots of Grand Master P’s narcissism, psychopathy, and lack of empathy, watching the video to this song together will introduce your kids to the magic of the Austin-Healey 3000, so it’s not all gloom and doom.

Of course, there are lots of other Cold War-era tunes to help you illuminate the current situation for your kids. If you have any that have helped you and/or your family, please drop them in the comments below. At this point, we need all the help we can get.

previousGenesis G70 vs G80: One For You, One For Mom
nextBadass Women of Automotive: Renee Brinkerhoff