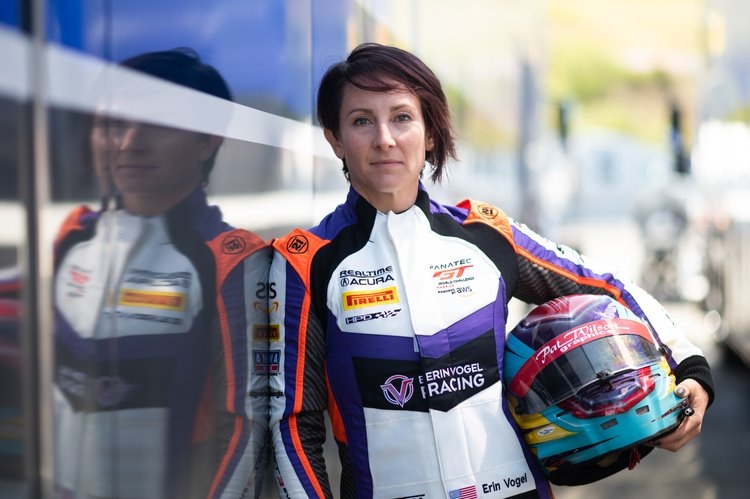 Since I started doing the Badass Women series, people come up to me (mainly in PR) and say, “You HAVE to meet X. You’d LOVE her.” Maybe I would. Maybe I wouldn’t. But I usually shy away from these types of introductions. Luckily, when my friend (and master PR dude), Dean Case, invited me to lunch with SRO racer Erin Vogel, I accepted. Before this, I wasn’t even sure what SRO was, but it turned out that it didn’t matter at all.

Erin’s (literal) track record is impressive: she’s the first woman to win in a race in the ProAm class globally in SRO GT World Challenge America. She did so in a Mercedes AMG GT3. She’s currently racing the Acura NSX GT3.

During our lunch, we talked about racing, women in automotive, why horseback riding is excellent training for driving, and why an innovative bra may solve all our problems. If I introduced you to Erin on the street, auto racing is the last profession you’d peg her for. She’s hilarious, humble, and whip-smart. She’s the woman you’d assume to be an advertising executive or entrepreneur, but certainly not a race car driver.

Mama: Tell me your backstory. Did you always want to race cars?

Erin: I had the competitive gene or whatever. I grew up horseback riding*, and that’s an environment where the big thing to do is compete.

Looking back, I was afraid to fail. It wasn’t until I started racing that I started to understand that failure’s not a bad thing and that it’s a great opportunity to learn and improve yourself and improve your skills and everything.

Mama: I love this. So how did it start?

Erin: My dad and my brother started high-performance driving and got totally hooked. And then my mom started going with them. So, when we would go out to dinner on a Monday night, they had this whole new language that I didn’t understand. It was all they wanted to talk about. I’d say, “I had brunch with a friend yesterday,” and they’d say, “That’s great. Maybe if we added more camber, the car would have more power in the turns.” I’d sit there wondering what camber is.

Erin: About a year later, I started driving with the Audi club, which was great. We made a network of great fun people we are still very close to. Then, about five years later, my dad and I kind of started looking at each other, and we’re like, where do we learn more? He wanted me to become an instructor.

I thought that once I became an instructor, the learning stops. So, I started racing. We did some grassroots racing, first in Subarus and then in Porsches.

Mama: How old are you at this point?

Erin: I turned 30 the year we started racing.

Mama: Ok. So you certainly didn’t start as a baby.

Mama: But was it weird for a girl to want to race cars in your family?

Erin: No, it wasn’t really like that. In fact, my mom is a huge tomboy. Her favorite toy in the world is her backhoe. She likes to move rocks around and dig ponds. My mom is so independent and capable.

Erin: She’s awesome. She bought her first motorcycle the day she turned 18 because her parents wouldn’t let her do it before that. I think she likes working on cars more than driving. I’ve been fortunate to have her as a role model.

Mama: What are your goals at this point?

Erin: Well, if the budget wasn’t an issue, I would love to be at Le Mans.

Now the Iron Dames are doing that, and I love it. I love what Iron Dames is doing and their marketing. They’re really making a difference in Europe, and I wish we had that here. I’d love to get more women into racing as drivers and fans.

Mama: Amen to that.

Erin: There are also things in the industry that are simply a disconnect. Like, I have a great idea for a bra.

Erin: Kind of, but one that fits a wide range of people and is comfortable in really hot environments like a race car.

Mama: It’s a cool concept, even if you’re not racing. I would buy that bra.

Erin: I would also love to get women into the top echelon of sports car racing—like Daytona. But when I talk to other female racers about that, we wonder, “where would we get the budget for that?”

Mama: Right, this is a very expensive sport. How are you making it happen?

Erin: It’s something I need to get better at. Lately, I’ve needed to learn how to go out and find the money. You can learn anything, right?

Mama: Do the economics hold you back as a racer?

Dean: I explain to new racers that motorsports is the Venn Diagram overlap of sports, technology, and business. And every time you want to move up a level, sell the car you own to buy something much more expensive to go 3% faster. Then if you want the best engineer etc., you’ve got to pay for it. I know how hard Erin works away from the track to provide value to her partners and make the business side of the diagram work.

Mama: Right… that’s insane. I’m sure for someone like you. It’s just a matter of time. Because right now, you’re already making a difference.

Erin: Yes, I’ve had multiple women tell me I was never interested in racing until I saw you race.

Mama: I love that. Whether you like it or not, you’re a role model.

If you’re interested in learning more about Erin, check out her website, IG, or Facebook page. You can watch Erin race at Sebring (Sept 24-25) or Indy (October 8th) on the GTWorld Youtube channel https://www.youtube.com/gtworld. She is the woman you need if you’re a parent looking for a positive female role model in racing. Or STEM, or anything. She’s a great role model for us all and 100% badass.

*Note: my daughter also grew up horseback riding. Erin and I spoke extensively about how that sport helps young women become comfortable handling something much stronger than themselves, can make them comfortable with speed, and helps to develop depth perception, awareness, and many other critical driving skills. But that’s for another post!