What I Learned From Consumers At The 2022 LA Auto Show 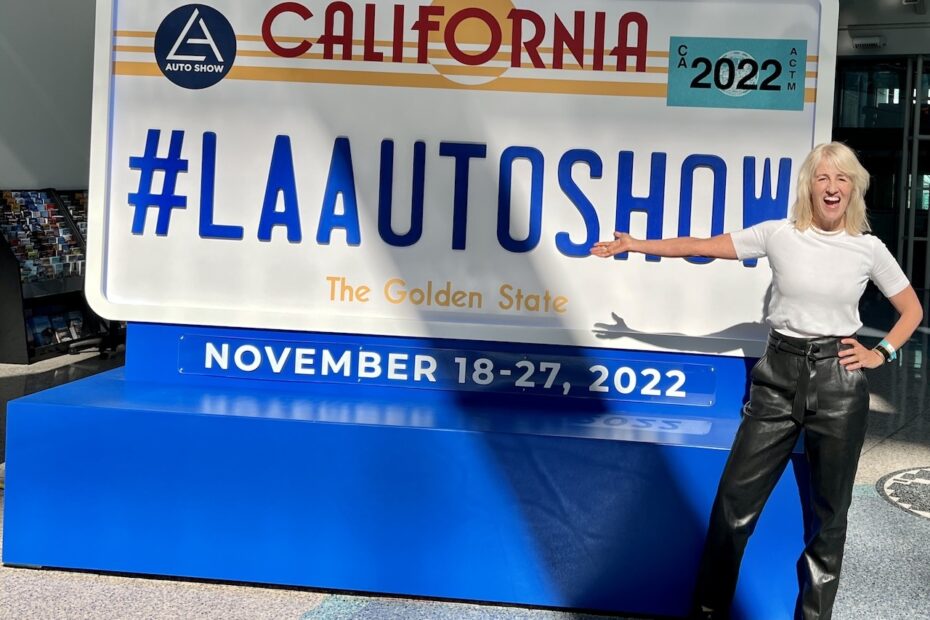 I came. I saw. I got 3 new blisters. Now that it has wrapped, I can’t help but reflect on how inspired I feel. Not just by the cars I saw or new technologies I witnessed but by the consumers I met at the 2022 LA Auto Show.

To be clear, this isn’t normally how I spend the auto show. Usually, I check out the new rides, party with friends, and look for terrible outfits. This year, I did that (duh), but I also worked as a guide for the show’s VIP tours.

These are people who pay a bit extra to be escorted around the show while the entire thing is narrated by an industry expert, or in this case, me. I’ve done a few in the past, and I LOVE it. Not only because it’s fun and I get to wear a sexy headset and have people follow me around like puppies, but because of the stuff they tell me. Here are my takeaways from the 2022 crew:

At the start of each tour, I’d ask people what they wanted to see. Inevitably they’d say two things:

In the world of electrification, there was so much to share with them. The latest from Chevy (Silverado, Blazer, and Equinox), the new EV6 GT from Kia, and the launches from Vinfast. Vin-what? Exactly!

Many of the people I toured were shoppers, and not just for holiday presents (although both can be cool— hint, hint, Santa!). These people had put off buying a car during the pandemic, and now they are ready for new wheels. Most were eyeing EVs, while a few were existing EV owners ready to expand their horizons (code for getting out of their Tesla). One of my tour attendees had a deposit down on both a Lucid and a Rivian and was there to “see their competitors.”

These people were so smart, so engaged, and so into learning more about what was on the show floor that the whole process really reinvigorated me! This leads me to the most important part:

Consumers (even in LA) Don’t Live And Breathe Cars!

As we were walking around the show, a few people would ask, “Where’s BMW?” and “Mercedes isn’t here?” As I told them the news that not all automakers are choosing to be in auto shows these days, they just brushed it off. “Oh, ok,” they’d say. A statement that was quickly followed by “What’s THAT?”

They wanted to explore the F150 Lighting– Ford’s electric truck. They wanted to know what Vinfast was. They were interested in the relationship between Hyundai, Kia, and Genesis. The consumers at the LA Auto Show had a lot of questions, and they wanted answers!

This part blew me away! Overall, my tours were very international. I had people from Columbia, several Canadians, and an entire family from Budapest. So if you think that these were just locals, you’re mistaken. I’ve met a few people in past tours that flew in for the show, but I thought they were just outliers. This year, it was clear that the LA Auto Show is a place where consumers come to learn and pre-shop, not just where enthusiasts come to compare notes. And they’re coming as families, which I love because that means…

The best part of my tours was the kids. Every single tour I did had a family. There were kids as young as five. I couldn’t believe how they kept their headsets on and paid attention. A few asked amazing questions. A few teens didn’t have their licenses yet, but they were still interested in cars (like what? OK, you do you.). But eventually, these kids will become consumers, of that, I’m sure.

I know I say this over and over again, but people who think kids aren’t into cars don’t get it. There were boys, girls, and a few that..hell, I dunno. I don’t really care. They were fired up, and that, in turn, gets me excited too.

Thanks To Them, I Will Do My Best To Keep It Real

Isn’t this what’s wrong with every industry? We get so caught up in talking to our colleagues, pleasing our bosses, and competing with our peers that we forget who brought us there in the first place—the people that read, watch the videos, and buy the cars. I, for one, know I’m as guilty as the next person. Thanks to the consumsers I met at this year’s LA Auto Show, I will do my best not to forget that not everyone lives and breathes cars. Mama gets it, and I appreciate the reminder. See you next year!

Let it rip in the comments below:

previousDude or Dbag: The Weirdest Outfits of SEMA 2022
nextWhat Would Diana Drive? Cars of Netflix’s ‘The Crown’ S5